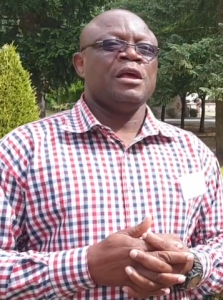 On the 4th of May 2020, the General Council of the Missionary Oblates of Mary Immaculate, in Plenary Session in Rome nominated Fr Joseph Ntumba Maboyi, for a second term as the Provincial Superior of the Oblate Province of Congo RD.
The Oblate Province of Congo RD is made up of the Oblates of Congo RD and the Oblate Mission of Angola. It is one of the biggest provinces in the African region, with 100 priests, 12 brothers, 38 scholastics, and 1 Bishop. The Angolan mission is also made of 14 priests and 1 scholastic.
The newly re-elected provincial, Fr Joseph was born in 1963. He started his novitiate in 1989 and made his first vows in 1990. After his first vows, Fr Joseph proceeded to Saint Eugene de Mazenod Scholasticate, in Kinshasa. He completed his philosophy formation and was sent for his pastoral regency before returning to the scholasticate to complete his theological formation. In 1996 he pronounced his final religious vows. Ordained priest in 1998, Fr Joseph was sent to the Oblate Mission of Angola. He served in Angola for some years before being sent to Cameroon for further studies and as a formator in the oblate scholasticate in Yaoundé.
After his studies and service in Yaoundé, Fr Joseph returned to his mother province. He later became the novice master and served two terms. At the end of his service as the novice master, he was elected provincial superior of the Missionary Oblates of Mary Immaculate, Congo RD, in 2017. He served the first tenure perfectly well that he was reappointed to serve again for another three years term.
Please, keep Fr Joseph and the Oblate Province of Congo RD in your prayers.
Posted by The iPriest at 11:45:00 pm