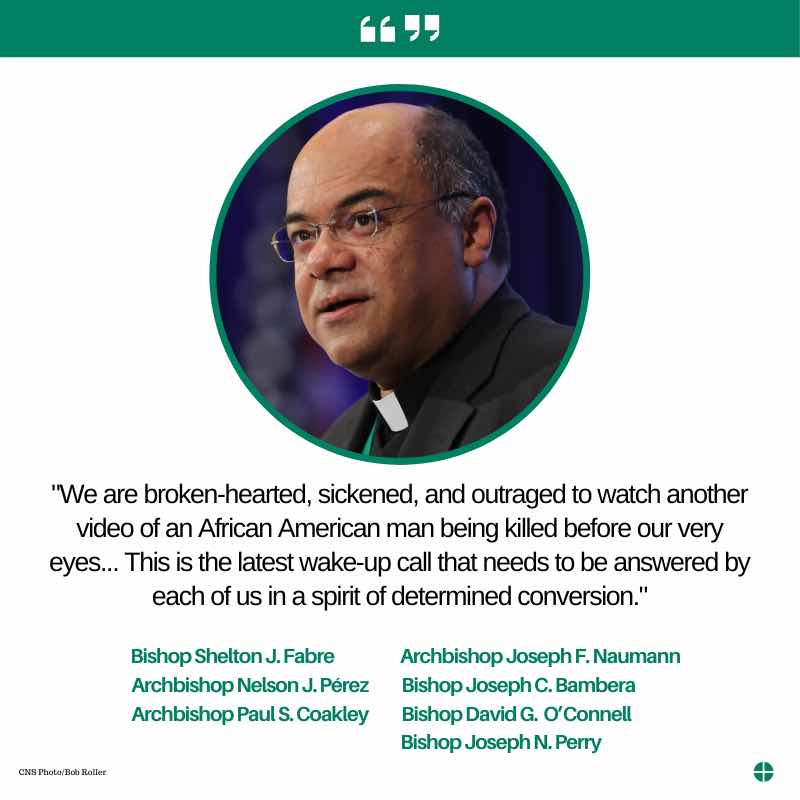 Seven Catholic Bishops occupying important social justice positions in the chair of the Catholic Bishops' Conference of the United States of America have issued a statement in the wake of the gruesome killing of George Floyd. The Bishops Shelton J. Fabre of Houma-Thibodaux, Chairman of the Ad Hoc Committee Against Racism; Joseph C. Bambera of Scranton, chairman of the Committee for Ecumenical and Interreligious Affairs; David G. O’Connell, auxiliary bishop of Los Angeles, chairman of the Subcommittee on the Catholic Campaign for Human Development; Joseph N. Perry, auxiliary bishop of Chicago, chairman of the Subcommittee on African American Affairs and Archbishops Nelson J. Pérez of Philadelphia, chairman of the Committee on Cultural Diversity in the Church; Paul S. Coakley of Oklahoma City, chairman of the Committee on Domestic Justice and Human Development; Joseph F. Naumann of Kansas City in Kansas, chairman of the Committee on Pro-Life Activities, started their one-page statement by expressing their sadness over the recurrent killing of black Americans.
In the statement, the bishops wrote: “We are broken-hearted, sickened, and outraged to watch another video of an African American man being killed before our very eyes. What’s more astounding is that this is happening within mere weeks of several other such occurrences. This is the latest wake-up call that needs to be answered by each of us in a spirit of determined conversion.”
The bishops insisted that “racism is not a thing of the past or simply a throwaway political issue to be bandied about when convenient.” For them, it is still real and present and continues to pose a great danger that can only be stopped when faced head-on. They recognized that as a Church they can no longer sit by the fence and pray that it magically disappears on its own.
And this is why as members of the Church, they wrote, they must stand for the more difficult right and just actions instead of the easy wrongs of indifference. They continued by insisting that they can no longer [hopefully] “turn a blind eye to these atrocities and yet still try to profess to respect every human life. We serve a God of love, mercy, and justice.”
They also stated that their support for the communities affected and plead that though it’s right for the affected communities to manifest their grievances, they should do their best to privilege non-violence protests: “While it is expected that we will plead for peaceful non-violent protests, and we certainly do, we also stand in passionate support of communities that are understandably outraged.” The bishops also recognized that too many communities around the United States feel their voices are not heard, and their complaints about racist treatment are ignored and that the Church is also not doing their best to point out that this racism is antithetical to the Gospel of Life.
Here is the full statement of the bishops:
Statement of U.S. Bishop Chairmen in Wake of Death of George Floyd and National Protests
Posted by The iPriest at 11:54:00 pm