Why Should Every Female Youth Corps Member Wear Trousers - Alisonomi 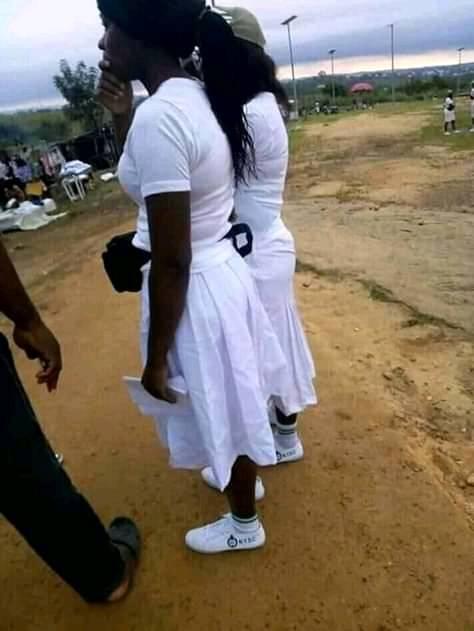 You might have heard about the girls sent away from the NYSC camp because they appeared on skirts. It was alleged that they were claiming that their Christian faith prohibits them from wearing trousers. Permit me to disagree with them too.  My reasons are simple:  wearing trousers is not against any Christian faith and the girls were going to be indecently dressed in those skirts. Let me take these points one after the other.
I have heard people quote Deuteronomy 22:5

“A woman must not wear mens clothing, nor a man wear women’s clothing, for the Lord your God detests anyone who does this.”

Brethren, can anyone show me where this bible verse condemned wearing of trousers? I really can’t see it!
But for those who might think that trousers are men’s clothing, let me tell them that they are wrong too. Trousers from the origin were meant for both sexes. It was popularized by soldiers and horse riders (men and women) who used it for riding the horse back.
And even the earliest historical knowledge of trousers in Africa was among the Amazonian soldiers who were all women. So, those who might think of telling me that it’s for men in Africa should first think twice.
I know some who might want to go ahead pushing the idea that in our culture, trousers are meant for men. Assuming they are right, it then means that our women are known for tying wrappers. If yes, if it could then mean that any man who ties wrappers, violates Deut. 22:5. Can we agree on that?
But there is a problem here too. Our ancestors never wore trousers. They tied wrappers either around their loins or around their waist almost like women do. Did they violate Deut. 22:5? Can we continue to argue that men who tie wrapper today are wearing women clothes?
Of course, dressing code evolves regularly and by the time the book of Deuteronomy was written, there was nothing like trousers among our vestments. And not even in the time of Jesus did we see men wear trousers either. So, cut me the crap with this roadside interpretation of this biblical injunction. No one sees verses 9-12:

“9 Do not plant two kinds of seed in your vineyard; if you do, not only the crops you plant but also the fruit of the vineyard will be defiled.
10 Do not plow with an ox and a donkey yoked together.
11 Do not wear clothes of wool and linen woven together.
12 Make tassels on the four corners of the cloak you wear.

How many have heard about that, talk more of respecting them?
Secondly, those partisans of skirts claim they were wearing it to avoid indecent dressing. Permit me to say that they were doing exactly the contrary.
Yesterday, the director general, National Youth Service Corps Scheme, Shuaibu Ibrahim made a very important post to clarify this question. Here is an extract of his Facebook post:

“The dress code remains, depending on the activity: a pair of khaki trousers and shirt; crested vest; white vest; a pair of white shorts; a pair of zebra - stripped socks; a pair of jungle boots; a pair of canvas; belt and fez cap.
[...]
It is imperative to state that the National Youth Service Corps Camp, predicated on discipline and decency in a training ground for Corps Members. Any other dress code, contrary to the officially sanctioned one will not promote the course of decency.
For instance, it will be utterly reprehensible for a female Corps Member to embark on obstacle crossing, and so many other physical training activities on camp, including parade in skirt or gown, which obviously will expose her indecently, thus, leaving little or nothing to imagination.”

Can anyone tell me how Christian faith has to do with this type of exhibitionism!
I have also heard people argue about Muslim corps members wearing hijab. I’m not a fan of hijab to begin with, but that argument is a lame one. Must every question in Nigeria be turned into a religious conflict question? If we Christians want to reclaim something, we should look for something serious and really Christian and not arguments like these ones.
Women pastors and religious sisters can wear trousers both in Nigeria and outside Nigeria and I don’t believe we are either more religious than those doing that or are we better instructed in the bible than they are.  But if women want to wear skirts, they should be free to fight for it but let them stop hiding behind the banners of religion to do so.
Posted by The iPriest at 1:59:00 pm