Igbo Catechism Booklet, an Outdated Handbook or a Backward Church? 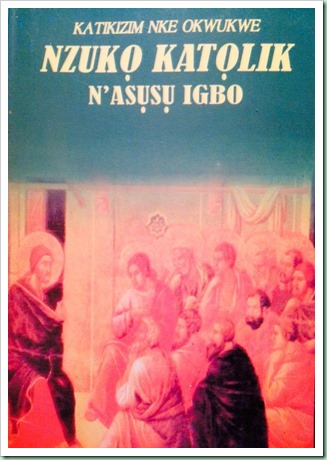 Last week I questionned the methodology of our «Katikizim Nke Okwukwe Nzuko Katolik N’Asusu Igbo» and I was told it has been upgraded. But from all indications, it was only furbished and nothing more. Now that I have the copy of the latest edition in my hand, I'm beginning to think that this Catechism that is based on a 19th Century methodology (more than 100 years now) is everything except adapted to the pastoral exigencies of today. It cannot in anyway validly communicate the Faith of the Church. I really do not believe in anyway that this method repeated from the inception of Christianity in Nigeria has its place today. I surely do not doubt the fact that this method was very effective at its time but no longer in our generation. In which discipline, has a 100 years teaching methodology has not changed if not our Catechism classes? I am convinced that this is a wrong approach to evangelization.

To buttress my point, let us examine two questions of this booklet today: Questions 87 and 88. The question 87 goes thus: “Gini mere i ji ekwu na Vejin Maria bu Nne nke Chukwu?” – Why do you say that Virgin Mary is the Mother of God? The second question asks: “Kowakene nke a nke Oma” - Explain it well

The beautiful answer to the first question is:

Just imagine a kid of 12 years memorizing this? What does he or she understand by one person? Does it mean “otu mmadu” or “otu onye”? Why is “pesin” used and not “mmadu or onye”? That’s not even my major preoccupation here but the fact that even those who proposed this are aware that it is not a clear answer. And that is why they go further to ask: “explain it well”.

And instead of explaining it at all, they went further to create the greatest confusion ever. Let's look at what is called explanation to the question “Kowakene nke a nke oma”

What on earth does this mean in a plain English? Is this what is expected of primary school pupils to learn to understand the Faith of the Church? Of course, they can't understand it and neither do I believe that their teachers do.

I think, Nigerian Church ought to examine the context in which this booklet was proposed to understand at what age were our grand fathers preparing for their baptism? I am certain that it was surely not at their tender age like today, if not, even them would not have understood it in those olden days.