What Does The Devaluation Of Naira Mean? 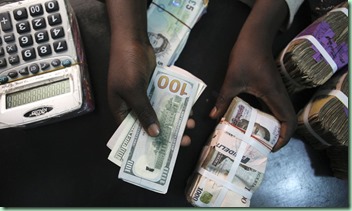 After fighting for months to maintain the value of Naira, Nigerian government has finally embarked on currency devaluation process. Owing to the continuous fall on oil price and the actual state of our economy, Nigerian Government had no choice than to play her last card.
Already, the pump price of PMS (fuel) recently increased following the removal of fuel subsidy. And Nigerians, in our normal way of being unnecessarily surprised by every new development, seem not to have read the hand writing on the wall.
Few days ago, on presenting the Buhari’s Economic Blueprint, the Nigeria Finance Minister, Kemi Adeosun, made it clear that they were planning for a slightly shock measure to reset the nation’s economy. She called on all Nigerians to be patient with the government.
According to Joshua Amuogo of Post Nigeria, she insisted: “We must collectively adopt a blueprint that equips the future generations to be creative and dynamic, that allows us to articulate a vision of a Nigeria, with a strong educational foundation; rich in depth of knowledge with a breadth of skills, an expansive infrastructure capable of servicing the needs of a nation of 150 million Nigerians.”
Mr Amaugo summarized the situation with this impressive analyses: “there has not been a consistent depletion to the external reserves, because of the consistent fall in oil price, which has made it difficult for the apex bank to continue to defend the value of the Naira.” And in this light, the devaluation of Naira seems not surprising if Nigeria is really willing to regain her economic equilibrium.
Furthermore, before we conclude that the devaluation of Naira shows the weakness of economic policy of the Buhari’s administration, it will be wise to go through this article first:

This month, China surprised world markets and spurred the most precipitous drop in the Dow Jones Industrial Average – falling more than 1000 points at the open of Monday August, 24 2015 – since the flash crash of 2010, by taking moves to devalue their currency. The Yuan is now down over 3.5% against the U.S. dollar over the past twelve months. This may not seem like a lot, but the Chinese government has traditionally held a strict peg to the dollar. The Chinese economy has become the second largest in the world, and is an integral component of global trade.
The ironic thing is that for many years, the United States government had been pressuring the Chinese to devalue the Yuan, arguing that it gave them an unfair advantage in international trade and kept their prices for capital and labour artificially low. Now that the Chinese are enacting emergency measures to devalue their currency, they are being blamed for bringing global uncertainty in markets. (For more, see: The Chinese Devaluation of the Yuan.)
This most recent event is nothing new. Ever since world currencies abandoned the gold standard and allowed their exchange rates to float freely against each other, there have been many currency devaluation events that have hurt not only the citizens of the country involved, but have also rippled across the globe. If the fallout can be so widespread, why do countries devalue their currency?
To Boost Exports
On a world market, goods from one country must compete with those from all other countries. Car makers in America must compete with car makers in Europe and Japan. If the value of the euro decreases against the dollar, the price of the cars sold by European manufacturers in America, in dollars, will be effectively less expensive than they were before. On the other hand, a more valuable currency make exports relatively more expensive for purchase in foreign markets.
In other words, exporters become more competitive in a global market. Exports are encouraged while imports are discouraged. There should be some caution, however, for two reasons. First, as the demand for a country's exported goods increases worldwide, the price will begin to rise, normalizing the initial effect of the devaluation. The second is that as other countries see this effect at work, they will be incentivized to devalue their own currencies in kind in a so-called "race to the bottom." This can lead to tit for tat currency wars and lead to unchecked inflation.
To Shrink Trade Deficits
Exports will increase and imports will decrease due to exports becoming cheaper and imports more expensive. This favors an improved balance of payments as exports increase and imports decrease, shrinking trade deficits. Persistent deficits are not uncommon today, with the United States and many other nations running persistent imbalances year after year. Economic theory, however, states that ongoing deficits are unsustainable in the long run and can lead to dangerous levels of debt which can cripple an economy. Devaluing the home currency can help correct balance of payments and reduce these deficits.
There is a potential downside to this rationale, however. Devaluation also increases the debt burden of foreign-denominated loans when priced in the home currency. This is a big problem for a developing country like India or Argentina which hold lots of dollar- and euro-denominated debt. These foreign debts become more difficult to service, reducing confidence among the people in their domestic currency.
To Reduce Sovereign Debt Burdens
A government may be incentivized to encourage a weak currency policy if it has a lot of government issued sovereign debt to service on a regular basis. If debt payments are fixed, a weaker currency makes these payments effectively less expensive over time.
Take for example a government who has to pay $1 million each month in interest payments on its outstanding debts. But if that same $1 million of notional payments becomes less valuable, it will be easier to cover that interest. In our example, if the domestic currency is devalued to half of its initial value, the $1 million debt payment will only be worth $500,000 now.
Again, this tactic should be used with caution. As most countries around the globe have some debt outstanding in one form or another, a race to the bottom currency war could be initiated. This tactic will also fail if the country in question holds a large amount of foreign bonds since it will make those interest payments relatively more costly…..(continue article on Investopedia)
Posted by The iPriest at 12:29:00 am