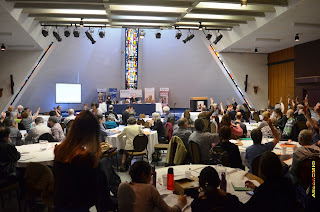 Between 22-24th April, 2016, the members of Development and Peace of the Dioceses of Quebec and New Brunswick, hosted their annual Regional Assembly at the Campus Notre-Dame-de-Roy, Quebec. The participants were francophone members, facilitators and observers of Development and Peace of mainly these two provinces and other francophone dioceses of Canada. The theme of this year's annual assembly, which regrouped more than hundred attendees, was “Let us create a Climate of Change.” 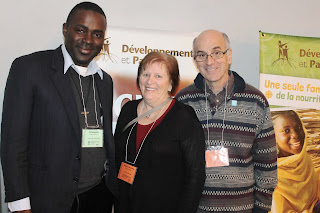 The Assembly commenced with a campaign on a free bottled water zone which was followed by a presentation of two representatives of CEPROSI (Centro de promocion de Salud integral). They presented the mission and project of this Bolivian partner of Development and Peace, Canada.
Ceprosi, in effect, is is an organization working to support grassroots micro-enterprise projects that provide sustainable economic opportunities
for women in local communities as well as to improve the nutrition and health of the wider 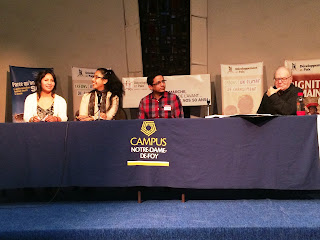 community. At the end of their presentation, the theologian Jacques Racine, presented the evolution of Social Doctrine of the Church to the members of the Assembly.

The second day was the most intensive of all as it was constituted, in the morning hours, mainly of deliberations, nomination of different members of committees, a presentation of the Director General and that of the the young ambassadors and ambassadresses of Development and Peace.  During the afternoon section, there were different workshop organized around the 50th anniversary of Development and Peace which will take place next year.
Other activities continued later in the evening hours after evening mass and supper.
The 2016 Annual Assembly, ended by Midday on Sunday after the adoption of the assembly’s propositions and nomination of members of national council of Development and Peace. The question of finding a way of promoting and collaborating with the Catholic Bishop Conference of Canada on questions regarding the First Nations of Canada was also largely touched. This year’s Assembly was a very interesting one as it continued to show that in spite of all the hardships connected with diminishing of donors and funds of development, the members of Development and Peace are still ready to go a long way to see that our brothers and sisters in need are not left.

Ali C. Nnaemeka (mekaalison@gmail.com) ''The truth might be hard to say, painful to bear or even drastic for the truth sayer but still needed to be said''. ALISON.
Posted by The iPriest at 1:51:00 am