I heard, I read, I went, I saw and I now believe in IIT-Lagos Have you heard about The Institute for Industrial Technology (IIT) Lagos? I never did till some months ago. In one of our forums, I heard from a good friend and brother of a centre located in Lagos where young engineers are formed in a very short period of time. I thought it was one of the make-believe centres where guys are assembled to learn how to make pure water and the related stuffs. I only picked interest because I have a strong believe in the brother in question. More enquiries gave me an access to their website - http://www.iit.edu.ng/ - which I also found really impressing. Knowing what commercials could look like, my critical thinking mind made me doubt all I had heard and what I was able to read online not minding they were both edifying. I just needed more reasons to believe. 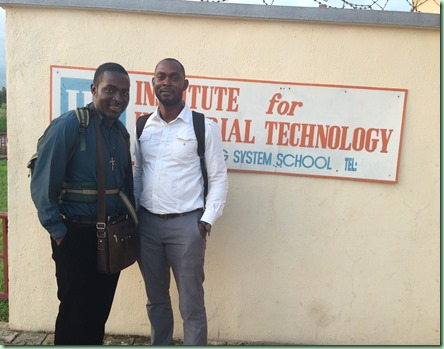 My primary preoccupation was how to wait till my next trip back to Nigeria to confirm what my ears have heard and all my eyes had read. And forced to anticipate my home visit by  the funeral of my mum, I used the opportunity to visit this important centre of youth formation.

Dropping of at Opic Bus Stop in Lagos, I was afraid my doubt were to be true as I could not see any reason to believe such a nice school existed in the environs. Picking a bike from the wrong side of the road, I started what I thought was a cross country. If not for such places like Channel House situated along the area, I was at the point of thinking that the bike guy was taking me to somewhere else. And at last, we arrived to a place very quiet that, if not for the sign post, I was almost asking if I were not at the wrong place.

My doubt, started going away already by the standard of reception I was accorded.  And by the time I started having a tour of their laboratories and workshops I was already at the point of wishing to move back the hands of clock so as to be of the age of attending such a wonderful institution. What surprised me most was not just the amount of equipment at the laboratories and workshops but the way they were cared for. Each equipment fitted well in its respective position that you were like no one ever touched them since they were bought. In a nutshell, the amount of orderliness in that school is unusual for average Nigerian Schools.

A look at the classroom activities shows you what excellency is all about: few students around a young and vibrant engineering lecturer, adequate and modern teaching facilities and well nurtured young Nigerians preparing to invade the labour market with innovations built on healthy ethics.

The rest of the staffs, move about with such powerful mannerisms that could make you doff your cap for them without knowing it. Brief, IIT Lagos is just a school where excellency is fabricated in technological laboratories.