Those Priests Who Disturb You 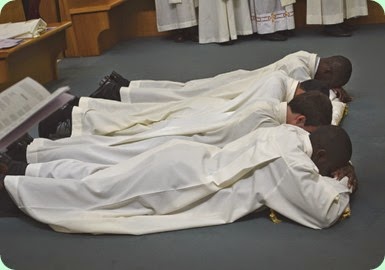 All those telling you priests should not speak; that they should only pray have no knowledge of either the Bible or the Church history. Did Jesus not speak against the politics of his time? Was Saint Paul not judged in Rome (the centre of the World) for his outspokenness against the powers that be? Was Peter and the Apostles not killed for their opposition to oppression of the ruling gangs? How many Church members were martyred for their opposition to the ruling government?
Let me not ask you of  Martin Luther King, Jr.​ But why was Óscar Romero​ murdered? Why were my oblate brothers Nelson Javellana, OMI, Bishop Ben De Jesus, OMI, Benjamin Inocencio, OMI, Rey Roda, OMI, killed in Philippines? Why did Fr Jean Marc Ela go on a forced exile ? Why was Bishop Yves Plumey, OMI, assassinated in Cameroon? What do you know about the engagement of thousands of priests and pastors in Latin America?

Stop quoting the Canon Law for me because you know little about it. The Bible you think is your back up is against your idea of priests. Priests should be prophets and shepherds and when a shepherd sits down and watch his flock devoured he is not worthy of his call. When a prophets stops denouncing the evil of his time, he has himself to blame.
Get rid of that your misconceived idea that priests are only expected to stay in the rectory and not talk about the society they are in. It is false! They are to be engaged in the active life of their people. They are ordained to the service of the militant Church. And by the militant Church we mean not the cathedrals and other buildings but you and me. The poor in the street. The barrow pushers who have no hope of going beyond barrow pushing. The okada men who have no aspiration than to be able to have Keke Napep at most. My parents and yours whose prayer is how to feed their numerous children? Those students whose dream is to find a way of paying their school fees. Those agbero boys in the car pack whose life consist in the little money they receive after loading your car. Those poor beggars singing nice melodies at the car pack for you to offer them the rest of your change. The women who carries their kids on their back as they move about selling their «Maman-Put».
The priest is not ordained to celebrate Sunday and morning masses. He is at the service of a Church in motion. A mobile Church. It should be found in the hospitals, in the streets, in the car packs, in the Market places. The Church is even now online. These and many others are the Church for which a priest is ordained.
It is high time we change our misconception of priesthood. To use the words of Pope Francis, the priest is ordained to move out of his Parish house and meet the people in their different places of life. So stop telling us to stop talking of our flock, we have received that mandate during our ordination. We are heralds and we can never stop denouncing the evil in our society as long as we are life. And more still, if ever we give up our life for this course. We are already dead if you think death can scare us.