The date of the conclave announced? 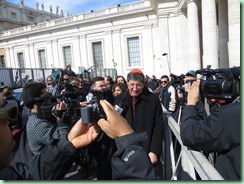 On the bid to elect the successor of Benedict XVI, the princes of the Catholic Church, the Cardinals have assembled in Rome for the meeting that will lead them to the Conclave. They started with the first session this morning. A calm session in which every participant was really involved, as father Frederic Lombadi, SJ, director of the Vatican Radio, expressed it. 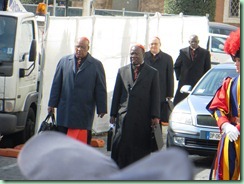 The arena of Saint Peter also wears a festive look with many tourists and journalists all around the Square. They all move from one direction to the other. A situation which looks unusual, even for those who are used to Saint Peter’s square. Apart from the number of journalists moving about with their materials, there were also a number of temporary installations of communication houses. The journalists move about looking for any person with red buttons. 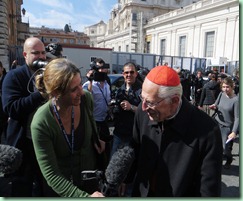 There was almost a pandemonium when the Cardinals started coming out. As the journalists run after them, they move very fast to indicate that  they were not yet disposed to speak. And even when one or two of them stopped to answer their questions, they were almost stampeded as Cameras of different sizes and Microphones of different dimensions were raining on them. Every media house was just trying to be the first to announce the date of the conclave. But were they able to obtain the date of the conclave?
One Spanish speaking Cardinal whose name I ignore answered the question. Looking a bit exhausted after the morning session, he responded with a smile on his face that the date of the conclave has not yet been fixed.
And here ends the News of the morning sessions. Follow us @ The truth will make you free for more information on the Conclave and the election of the successor of Saint Peter.
Posted by The iPriest at 4:59:00 pm