The Pope that we need: Sede vacante - Vacant Seat 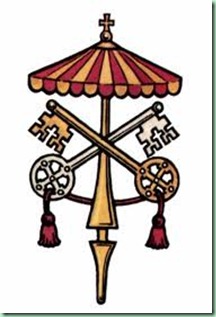 As the Petrine seat remains vacant waiting for the next Pastor of the flock of God, people of God all over the world keeps on praying for the continuous presence of the Holy Spirit among the princes of the Church as they are preparing for the election of a new Successor of Saint Peter. As they start their congress tomorrow for the eventual commencement of the Conclave, which likely might not start before Monday, 11th Match 2013, and every media house seems to have its own candidate for the office of the Vicar of Christ. They move about asking the point of view of every passer-by, whether he knows anything about the papal election or not.
Their speculations are all about who should be the next pope, whether from Africa, from Europe, Latin America or from Asia, as if what 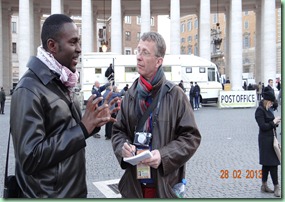 matters is the geographical origin of the pope. Anyone who passes around Saint Peter’s Square these days notices that the Media houses are seriously doing propaganda and lobbying as if the Petrine office is a political post which one’s political family or logo determines the manifestos which the elect will execute at his nomination. All they forget, I would say, all they claim to have forgotten, however, is that the Church of God is not a political party. They also portray to the world an image which resembles a situation of political uncertainty, just like what we observe in nations in the absence of a ruler. A situation where nothing moves on and more especially, where there is a fear of an imminent coup-d’état.
Nevertheless, the Church continues its pilgrimage even though the visible pastor of the flock remains unavailable. This moment of Sede Vacante – Vacant seat, does not, in anyway, paralyse the Church as the person of the Pope is not what makes the Church function. His role, in reality, outside the fact that he is the Vicar of Christ - who never leaves the Church alone, is to coordinate the individual functioning of the Local Churches. He exercises his function in collegiality with and through other Bishops in different parts of the planet.
The visible signs of his absence are the presence of an emblem of Sede Vacant, the sealing of the papal apartment at the Vatican City, the sealing of the principal port of the Lateran basilica, etc. As to the Pope Benedict XVI, he will be called Pope emeritus, will seize from wearing red shoes and his ring of pastor disfigured (put out of use).
All the same, it is necessary to underline that among the speculations that we observe today, there are those that should not be ignored.  They are the speculations on the qualities that are expected of the next visible head of the Catholic Church. They are, among others, he should be:
1.      a pastor,
2.      not just an intellectual but someone who though well versed in theology must be very closed to the people,
3.      a man of God,
4.      close to the people,
5.      a lover Christ,
6.      sensible and capable of reading the signs of the time,
7.      a pastor who loves the Church,
8.      a young but well experienced pastor, etc.
It is really a very intense moment as there are many tourists and pilgrims at the Cathedral of Saint Peter today as observed by a journalist of the Vatican Radio. Some of them, he explained, have come to see what the Vatican looks like without the Pope and the Angelus. While some of them saw the situation as not normal, others observed, in a joyful tone, that the Church continues without any perturbation even though the visible head of the Church is absent. This reminds, however, what Benedict XVI said during his resignation, that the Church is not his, but of Christ and therefore will continue even without him.
Posted by The iPriest at 5:39:00 pm