Pope Francis and his option for the poor 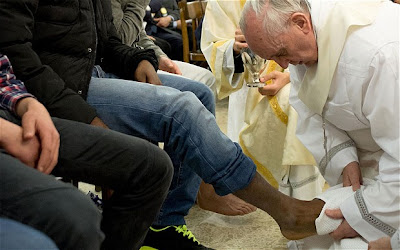 Pope Francis in his bid to reach the most abandoned of the society decided to celebrate the mass of the Holy Thursday at the prison of minors in Rome. His decision to celebrate this very important mass in the prison, contrary to the customary celebration at the Papal basilica of Saint John of Lateran has once demonstrated his determination to reach as many abandoned of the society as possible.
In his homily, he reiterated what he said in the homily of his inauguration mass. During that mass just like today, pope Francis insists that the strong should serve the weak and the rich the poor.

''The truth might be hard to say, painful to bear or even drastic for the truth sayer but still needed to be said''. ALISON.
Posted by The iPriest at 7:43:00 pm