On the way to the Conclave: the reunion of Cardinals or journalists?

As the days of the Sede Vacante prolong and the days to the Conclave approach, Saint Peter’s Square becomes more and more a place of attraction.  The number of journalists and pilgrims increases every day and the antenna of every media house turned to the Eternal City. 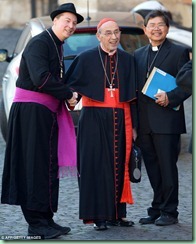 Covers of many International Magazines and Newspapers are decorated with different images of Cardinals ranging from the image of young Cardinals through that of the aged ones and even to that of a “comedian” called Ralph Napierski Who to attract the attention of the Media put on a Bishop-like attire and a pair of sports shoes and went about taking pictures with different Cardinals. In fact, it seems actually, that any News briefing without a headline on Conclave either makes the media house uninformed or not up-to-date. The situation reminds me, exactly what the News briefings used to be during the Arab springtime. 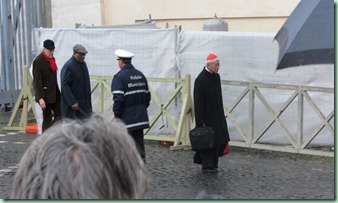 This morning, the Cardinals had their fourth session. From their facial expression as they came out, it was clear that the gathering of these princes of the Church has been a fraternal gathering. So, as the morning session usually ends around 12:30pm, by 12:45 pm, the whole arena was surrounded by the guards who were leading out these “red buttoned princes”. The experience of the past days has, surely thought the Security Service on duty to accompany the cardinals as the journalists were ready, if possible, to force words out of their mouth. For this reason, the cardinals were either to appear very serious – a kind of “do not disturb my tranquillity”- in order not to be cornered to an angle by the journalists. It was really a spectacular scene seeing some of them almost disguised so as not to attract the attention of a troop of walking cameras and microphones. 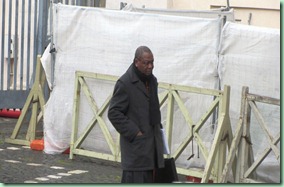 For example, as they were coming out from the morning session, there were many fast walking Cardinals and some who though were walking quietly, had the air of “please-do-not-ask-me-any-question”. There were also some who appeared natural and smiling as they walked along - a normal attitude for the red buttoned princes. But these ones were obliged to be rescued from the throng of journalists. The two categories that were less disturbed were those who either were on private cars and 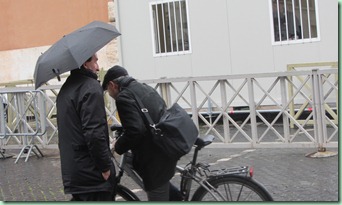 cardinal Philippe Barbarin, the Archbishop of Lyon, France. The former, because the journalists had no option than to either photograph them or video their fast moving cars, and the later because being on a bicycle and without any clerical attire was taken to be like every Tom and Jerry.
Posted by The iPriest at 4:55:00 pm