How long and faithful will Pope Francis be with his option for the Poor?

The new pope has been very wonderful. I can now understand 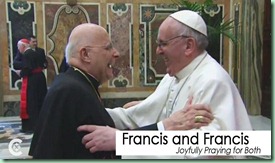 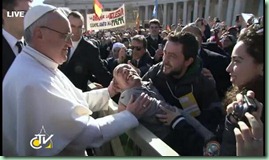 why he has never ceased to ask for prayers in all his public appearance. He has never passed a day without making a thought provoking decision. I mean decisions that are worth making and are necessary for todays demand of the petrine ministry. We have heard him change the “norms and uses” in the Vatican city, starting from greeting all those who attended his first Sunday mass through changing the customary location of the celebration of the Holy Thursday Mass. We have also heard of his recent decision to live longer in the apartment of Saint Martha instead of moving to his Vatican residence. All these are good ideas and worthy of emulation.

However, the question that remains is how long will this last. We would want them to continue like this but still, Cardinal Francis Georges, omi, thinks it might not always work out, institutionally speaking. Here is what he has to say about that.

ROME — — Pope Francis continued on Tuesday to remind his flock of the duty to protect all of creation and embrace the poor.
Cardinal Francis George intends to carry that call back with him to the Roman Catholic Archdiocese of Chicago when he returns Wednesday. But he also intends to accept the challenge himself.

"They are challenges that are welcome," he said. "How are we sure that we're closer to the poor? We do it more institutionally than personally in a place like Chicago. I've always tried to do it personally, but you get lost in the shuffle."
George wonders whether Francis also will encounter a slew of new pressures that prevent him from being the pastor he wants to be.
"The challenge now for him is to translate a personal virtue into an institutional characteristic, and I'm not sure how you do that," George said.
In fact, George recalls his own attempts to accompany the poor when he came to Chicago almost 16 years ago. A former Missionary Oblate of Mary Immaculate, he had travelled to some of the world's poorest regions. As soon as he moved into the archbishop's residence on State Parkway, he made a commitment to regularly visit the clients served by Catholic Charities.
But after six months, he said, that obligation fell by the wayside as his administrative duties and public calendar ballooned. He relied on institutions such as Catholic Charities, Catholic schools and the Society of St. Vincent de Paul to do the work he didn't have time to do.
Pope Francis could face similar pressures, George said, especially as he works to reshape the Roman Curia, the bureaucracy that helps run the worldwide church.
"He will be changed by the office," George said. "We all are. I'm different than I would be if I hadn't been the archbishop of Chicago. So we'll see. He's a man of great integrity. He won't do anything that doesn't seem right to him."
George, who is a month younger than Francis, submitted his mandatory letter of resignation on his 75th birthday last year. He said his future retirement might be an opportunity to reach out to Chicago's poor more personally.
In the meantime, he intends to discuss measures with his auxiliary bishops to bolster the archdiocese's response to poverty in Chicago with authentic action.
"The poor have seen caseworkers come and go. Unless there's a real commitment to them and you're willing to spend time with them, you can't breeze in and breeze out," George said. "That's manipulating people. There's no point in doing that."