The dilapidated situation of the Nigerian Police Force, whose fault is it? 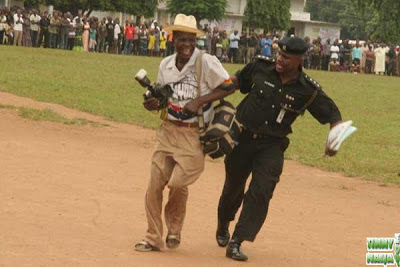 Anyone who have seen the glory that the Police Force enjoy in other Countries of the World, more especially in the west, will not only be surprised but scandalized by what Police Force is in Nigeria.  For average Nigerians, the word Police is synonymous to corruption. They are known by their rampart road blocks meant for bus and taxi drivers, Okada riders etc. They are regularly seen in their habitual "second collection" - bribe taking from any passing drivers independent of the content of their vehicle or in their regular bullying of civilians, if not careless shooting of any driver who fails to stop.
They also have the reputation of arriving, at the height of their siren, to the crime scene when the bandits had all gone. For these reasons, they have been giving many names, and have been insulted by all who have had the opportunity of doing so, without awaking their wrath.
In this article, Channels Television explores the cause of all these dilapidating shameful  situation of the Nigerian Police Force.
Nigeria Police Training: Expecting Something From Nothings

The capacity of the Nigerian Police Force is currently being overstretched by the insurgency in the North, abuses against ordinary citizens and undermining of the rule of law. According to a report of the Human Rights Watch, Nigerians don’t trust the police; citizens generally have a bad impression of police officers because of their perceived brutality and corruption.

You may have seen how dilapidated the police quarters are, possibly have heard how horrible the Nigerian Police cells can be. The reality is right from the Academy, the Nigerian Police officer has known no better way to live.
In what can be described as a brazen show of the harsh reality, a Channels TV documentary on the life of trainees living in the Nigerian Police College, Ikeja has revealed the deplorable conditions faced by people who will later graduate to become policemen and women that Nigerians would rely on to serve and protect them.
Channels TV began the New Year with a focus on the rehabilitation of the foremost training college of the Nigeria Police with an x-ray on the life of students living in the college.
The video below depicts the sad state of the dormitories, the toilets and more. Students were seen urinating at the back of the building where the drainage system has broken down completely. The toilets and bathrooms are in such terrible conditions, one wonders how they manage to use them.
Male dormitory 10 is one of those built by Nigerian colonial masters in 1940. Today, its windows and doors are damaged with no plans for any repairs. There is no electricity and the occupants point out blood stains from bed bug bites.
The College once had an Olympic-size swimming pool which is now a breeding ground for toads. It used to win medals for shooting all over West Africa but there is no shooting range anymore.
Jonah Mavah, the Deputy Commandant of the College said there has been no major development since establishment except for some few renovations. The College itself was built for 700 students but today, it accommodates 2,554.
As for the library, the Staff says they cannot remember the last time books were supplied to the library which is full of museum pieces and antiquities called books bought in the 1970s.

Continue the article in Channels Television

''The truth might be hard to say, painful to bear or even drastic for the truth sayer but still needed to be said''. ALISON.
Posted by The iPriest at 5:39:00 am