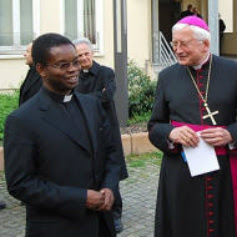 The Holy Father, Pope Benedict XVI,  on Saturday 10th November appointed Msgr. Fortunatus Nwachukwu,  as the apostolic nuncio to Nicaragua. The bishop-elect was born in Ntigha, Nigeria in 1960  and ordained a priest on 17th June 1984.

A priest of the Diocese of Aba in Nigeria, he has a Bachelor’s degree in Philosophy (Urban University, Rome), and completed a Doctorate in Sacred Scriptures at the Biblical Institute in Rome, before transferring to the Jesuit Faculty, Sankt Georgen, in Frankfurt, specializing in Old Testament textual criticism. He obtained doctorate degrees in Systematic Theology and in Canon Law, respectively from the Pontifical Urban University and the University of St Thomas Aquinas in Rome. He was called into the diplomatic service of the Holy See in 1994, after attending the Pontifical Ecclesiastical Academy in Rome. He served as Secretary at the Apostolic Nunciatures in Ghana, Togo and Benin, in Paraguay, in Algeria and Tunisia and as Counselor at the Permanent Mission of the Holy See to the United Nations at Geneva. In 2006 he became the Desk Officer for human rights and United Nations Organizations in the Vatican Secretariat of State. In 2007 he was appointed Head of Protocol of the Secretariat of State of His Holiness.
His publications include The Birth of Systematic Theology in Contemporary Black Africa, The Courage to Change: Take Off Your Shoes, as well as numerous articles and a number of reflections on theology in Africa, published both in L’Osservatore Romano1.

''The truth might be hard to say, painful to bear or even drastic for the truth sayer but still needed to be said''. ALISON.
Posted by The iPriest at 5:46:00 pm