A new Nigerian youth model, Malala Yousafzai: The courage of a child who stood up against the Taliban

As we continue to insist on the role of the youth in the project of a better Nigeria, we think that there is a need to propose some role models who, for socio-historical reasons, share the same reality with Nigerian youths. From all indications, Malala Yousafzai is one of those youths from whom Nigerian youths can learn a lot. Here is a nice article on this very issue:

Nigerian girl child and the Malala inspiration By Emmanuel Onwubiko 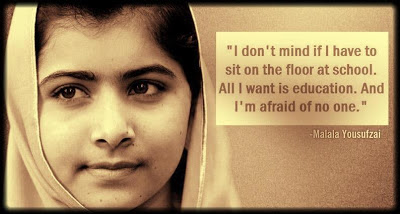 THE last couple of weeks have seen the World’s attention focused on issues around the girl-child. Precisely on 11 October 2012, the World marked the first ever special day reserved by the United Nations as the International Day of the Girl Child.
Incidentally, while the rest of the World paused for a while to reflect on ways and means of promoting, protecting and enforcing legislative frameworks and laws that safeguard the rights of the girl child, the people of Pakistan were thrown into shock and trepidation over the attempted assassination of a foremost girl child activist, the little Miss. Malala Yousafzai by armed terrorists belonging to the banned Taliban gunmen while returning home in a school bus.
The attempt on the life of this young school girl who has shown remarkable gifts and talents as a good speaker and defender of the educational right of the girl child drew International condemnation.
The inspirational story of Miss. Malala Yousafzai as captured by the online encyclopedia Wikipedia has it that she was born in 1998 in the town of Mingora in the Swat District of Pakistan’s North-West Frontier province.

''The truth might be hard to say, painful to bear or even drastic for the truth sayer but still needed to be said''. ALISON.
Posted by The iPriest at 10:30:00 am