Chinua Achebe and the Biafran Saga!

There are many who have been making comments and criticism of the recent book of Chinua Achebe, There Was A Country: A Personal History of Biafra, but have not yet seeing the back cover of the so called Book. Sure, I do not intend to prevent people from sharing "their view" on a book they have not yet seen, but I am just thinking they should adopt the wise adage: "If you do not what to say, you then keep quite". However, not everyone will have the opportunity of laying hand on such a work, but many could also have the opportunity of not only listening to those who read the book, but to those who read and compared the work with their own personal experience of the Nigerian-Biafran war.

This work, undoubtedly is one of the greatest, most debated and contested write-up in the annals of Nigerian literary world. Here is a résumé done by a Nigerian whose childhood was shaped by the life after Biafran fall.  It is a summary worth reading, at least for all those who have been longing to have a taste of such a golden piece.   Enjoy the résumé!

Nigeria is haunted by Biafran war by Ike Anya 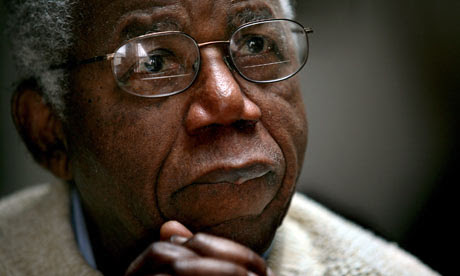 Chinua Achebe. Photograph: Craig Ruttle/AP
In our house in Nsukka, the small university town in eastern Nigeria where I grew up, my parents' bedroom harboured a cupboard, reached only by standing on a stepladder. In that cupboard lay a battered brown leather satchel, filled with memorabilia from Biafra. I remember Biafran stamps, currency notes and coins, photographs, receipts, letters and a small green hard backed pamphlet: The Ahiara Declaration.
From time to time, under conditions of great secrecy, the satchel would be brought down and my brothers and I would be allowed to rummage through it as my parents told us stories of their harrowing experiences during the war. We would look at photographs of friends and family "lost" in the conflict, or during the massacres of Igbos that preceded it. We would marvel at the lightness of the Biafran coins. I don't remember my parents explicitly saying it, but somehow it was communicated to us that the satchel and its contents were not things to be discussed outside the family home.
In Nigeria in the 1970s when I grew up, Biafra was only talked about in hushed tones, in an atmosphere of an unspoken fear that talking about it could bring reprisals.
A few weeks ago, I was lucky enough to be invited to an early rough-cut screening of the film version of Chimamanda Adichie's book, Half of a Yellow Sun. At the end, in the darkened room in Soho, as I joined others to congratulate the director Biyi Bandele, I found myself hugging him instead and felt to my embarrassment, tears running down my cheeks. As I apologised, avoiding the bemused stares from some of the staff at the venue, I explained to Biyi that I had felt such a powerful reaction because the story he was telling was the story of my family – of my parents and grandparents.
That evening, as on the phone I described my feelings watching Biafran refugees fleeing the university town of Nsukka to my mother, who had herself fled the town with my father and elder brother in 1967, she said "I am glad that our story is going to be told, that the world will remember".

Chinua Achebe's new book There Was A Country: A Personal History of Biafra emerges into this landscape of memory and remembrance, 42 years after the war ended. In the book Achebe, a few weeks before his 82nd birthday, finally sets out to tell the story of his Biafra. The format he adopts is novel – involving a rambling mix of anecdotes, summarized histories, analysis, reportage, declamation and haunting poetry. In some ways, reading the book feels like I imagine spending an hour or two chatting with the distinguished novelist might.
He roams from the story of how Nigeria came to be, to his schooldays and burgeoning friendships with prominent figures like the poet Christopher Okigbo, whose presence looms large through the book. Interspersing the historical account is the story of his father, one of the early Igbo converts to Christianity, and his experiences growing up with newly Christian, trailblazing parents caught between the old traditions and cosmology of the Igbo people and the new Christianity. The personal glimpses into his early life are hugely enjoyable and indeed tantalizing – often outlined so succinctly, that he leaves the reader greedy for more detail.
Approaching the events leading up to the war - the descent of the first post-independence Nigerian government into an abyss of corruption and misrule; the role that the colonial government played in setting the stage for this descent and the first military coup in 1966 – he acquires a less personal and more straightforward recounting tone. This continues until the latter part of the book, when he begins to describe the counter-coup of July 1966, the massacres of Igbos that followed the coup, the failed attempts at negotiating peace and the subsequent declaration of independence and the harrowing consequences that followed.
Achebe, as is his right, does not pull any punches, although he does make some concessions to alternative points of view, especially in relation to the legacy of colonialism and the moral imperative on writers to produce committed literature. He is less conciliatory on the question of whether the actions of the Federal Government of Nigeria during the war constituted war crimes and, possibly, genocide. He is scrupulous in naming the officers and individuals responsible, and where possible provides their viewpoints based on news and other reports.
He also highlights the role played by Western countries and the international community. And he challenges the popular perception that General Gowon's "No Victor, No Vanquished" policy at the end of the war in 1970 led to the successful re-integration of the Igbos into Nigeria, highlighting the egregious government policy which wiped out the savings of every Biafran who had operated their bank accounts during the war with an "ex- gratia" payment of just 20 pounds. He is also laser sharp in his conviction that part of Nigeria's problem stems from its anti-meritocratic suppression of the Igbo people, and the refusal of the country to face up to insalubrious aspects of its history, issues that he argues continue to haunt it.
Of particular interest are the snippets that emerge of life in Biafra – the intense emotional connection of a people united by the fear and anger at the massacres, the ingenuity of the engineers who fond ways to refine petrol or build bombs and the efforts of artists and intellectuals to contribute to building a new nation. He also describes his own forays to foreign capitals to seek their support for the Biafran dream and the eventual withering and death of that dream. Sprinkled through the book are excerpts from a series of interviews commissioned by the Achebe Foundation with many of the key players in Nigeria's history. These, when eventually published, should provide a rich resource and other perspectives on the events that the author describes.
The final section of the book picks up on Nigeria's journey since the end of the war, dipping into the failures of governance and the consequences, raising several questions that need to be addressed for the future.
The book could benefit from a closer proof-reading and fact-checking process by an informed editor. Irritating errors crop up like "maul over" for "mull over" "deferral" for "federal", "Iwe Ihorin" for "Iwe Irohin" and St Elizabeth's Hospital for Queen Elizabeth Hospital, but these do not detract from Achebe's attempt to present, from his perspective, an account of those dark days. As he says in the book, "My aim is not to provide all the answers but to raise questions and perhaps to cause a few headaches". It is clear that this is his book, his view and his own particular nostalgic ramble. Ultimately, it is important that he has shared it, warts, unevenness and all. In doing so, Achebe has helped bring the contents of my parents' brown satchel back into the open.
Ike Anya is a Nigerian public health doctor and writer based in London. His essay People Don't Get Depressed in Nigeria appears in the current edition of Granta Magazine.

''The truth might be hard to say, painful to bear or even drastic for the truth sayer but still needed to be said''. ALISON.
Posted by The iPriest at 7:35:00 pm