Orphaned girl starts university in Zimbabwe at 14 By Teo Kermeliotis, for CNN

I have always believed that self esteem and determination is a good step to self self-fulfilment. This is exactly the case of this little girl who, at the death of the parents decided to pave a way for herself. It is quite interesting and worthy of reading and reading. 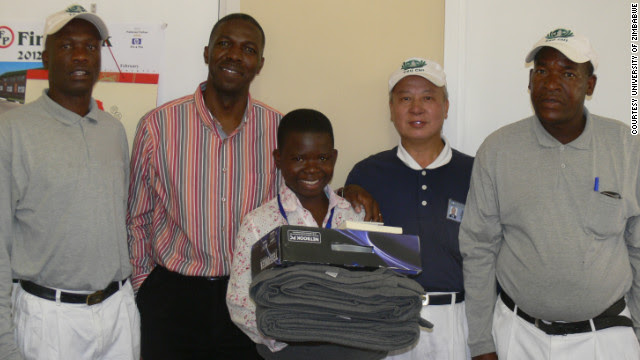 Maud Chifamba, middle, started her studies in accounting September 10 at the University of Zimbabwe. Aged 14, she is the country's youngest ever university student.

STORY HIGHLIGHTS
(CNN) -- She grew up in grinding poverty, losing both her parents at a tender age but 14-year-old whizz-kid Maud Chifamba has defied adversity and hardship to break academic records.

Against all odds, the extremely bright teenager has written history as last week she became the youngest ever university student in Zimbabwe -- as well as the whole of southern Africa, according to education officials.
Maud, who was born on November 19, 1997, has just started her studies toward a Bachelor of Accountancy Honors Degree at the University of Zimbabwe, the country's oldest and most esteemed educational institution. Her intellectual prowess and hard work have earned her a four-year scholarship of nearly $10,000 after she excelled at last year's Advanced Level exams.
Now, one week into her new life at the university, softly-spoken Maud already feels settled.
"I'm really enjoying it," she says with striking modesty. "It's better than what I expected. I'm just enjoying all the lectures."
Read related: 'The future of Zimbabwe is bright'
It really motivated me to work harder because there was no one to take care of me except myself.
Maud Chifamba
But before deservedly claiming a spot inside the university's vast lecture halls, finding herself amongst much older students, Zimbabwe's wunderkind had to overcome tremendous financial and social challenges.
Born to a poor family in the Hunters resettlement community in Chegutu, central Zimbabwe, Maud lost her father when she was just five years old. Her mother also passed away last year. Her two brothers, who are general workers at a farm, were unable to pay the fees required to keep her at formal school so Maud started studying vigorously at home all by herself.
Armed with determination, Maud put all her efforts into studying, embarking on a disciplined reading routine that lasted for several hours each day. "I studied very hard," she remembers. "For the biggest part of the day and even into the night," adds Maud.
Maud says the death of her parents made her realize that she would have to take her destiny into her own hands.
"It really motivated me to work harder because there was no one to take care of me except myself in the future," says Maud. "That was ... a motivator for me to have something to do with my life."
Gifted with natural intelligence, Maud's promising future was apparent from an early age. Her remarkable aptitude impressed her primary school teachers who decided to move her up from Grade 3 to Grade 6.
Aged nine, she took her final primary school examinations, where she obtained top marks for all of her subjects. Lacking financial support to undertake her high school education, Maud studied on her own and completed her Ordinary Level in just two years after skipping two forms.
Read: How 'Afropreneurs' will shape Africa's future
Her hard work paid off last December when she scored 12 points at her A-Level exams, an astonishing feat that earned the 14-year-old girl a place at the Harare-based University of Zimbabwe.
"It's phenomenal, especially if you consider that for her A-Levels she was not in formal school," says Gershem Pasi, the commissioner general of the Zimbabwean Revenue Authority, the body that's now sponsoring Maud's university education. "She was just reading by herself at home and her brothers only managed to pay the examination fee."
Munyaradzi Madambi, dean of students at the University of Zimbabwe, describes Maud as a "very warm and polite young woman," whose intelligence and maturity shines through.
"(She is) confident, efficacious and unique in the sense that you don't normally expect this position among kids from underprivileged backgrounds," he says.
Madambi says the university is committed to helping its wonder student develop into a balanced individual while fulfilling her dreams.
Maud is an exceptional case in terms of intellectual prowess.
Munyaradzi Madambi, dean of students at the University of Zimbabwe
"We are making sure that she grows up to be a well-moulded, mature adult but of course without really suffocating her or putting her under any pressure," he says.
Zimbabwe has an adult literacy rate of 92%, which is one of the highest in Africa, according to UNICEF. Madambi says people in the country have an "incredible and insatiable appetite for education."
"Normally those that come from underprivileged backgrounds, their desire is really to work hard and excel and of course Maud is an exceptional case in terms of intellectual prowess," he says.
Maud is now on course to conquer even greater heights, becoming Zimbabwe's youngest ever accountant when she graduates in four years time.
"My dream job is to become an accountant," she says.

''The truth might be hard to say, painful to bear or even drastic for the truth sayer but still needed to be said''. ALISON.
Posted by The iPriest at 8:01:00 pm