Nsukka: Herbalist with 48 wives, 200 children in trouble By Chinenyeh Ozor

NSUKKA- The arrow of God is no longer at  ease and things have fallen apart in the household of an Enugu herbalist who is married to  48 wives and blessed with about 200 children some of  whom are born again Christians. 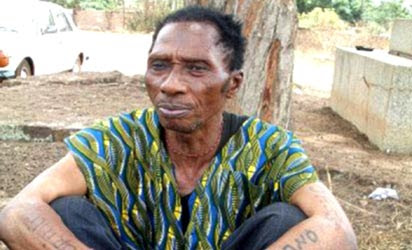 His children have insisted he must repent and give up the  business but to no avail. The 66-year-old herbalist, Chief Simon Odo (a.k.a Onuwa, Africa Solomon or Satan is sleeping) who hails from Aji, Igbo-Eze North Local Government Area, Enugu State, and started his herbal business at the age of 15 told Crime Guard that until recently, peace, order and tranquility reigned in his household as he ensured that  he meet up their demands.

Crime Guard, learnt that over time, seven of his children were ordained pastors at the Lord’s Chosen Pentecostal Church. Hitherto, some of them attended Catholic and Anglican churches while many of them took after their father in his business.
However, the ordination of the pastors brought about a radical Christian awakening in the extra-large family of Chief Simon Odo.  A reliable family source told Crime Guard that since the past two years, there had been a simmering misunderstanding between the pastors and their father regarding his herbal practice.
The pastors were said to be mounting heavy pressure on him to repent and turn to Jesus, a demand   the  herbalist spurned. Odo, said to have lost one of his wives last February, had arranged for the burial programme, which his pastor sons rejected and rather organized a prayer programme for her burial.
In the confusion that ensued, the pastors and some others of his children allegedly manhandled their father and tore his clothes to shreds. The herbalist was said to have petitioned the police Area Command, Nsukka, on the development.
*Onuwa
Crime Guard who met with the herbalist at the Area Command, Nsukka in a  “Jumper” which he claimed was torn by his born-again children,  said, “  the beating is unacceptable and I cannot tolerate it and that was why I sought police  intervention to prosecute them.”
Odo’s trouble started two years ago when he allegedly discovered that one of  the so-called pastors had carnal relationship with one of his wives (name withheld), explaining that  when he (Odo) accosted him, the boy reacted by mobilizing others to rebel against him.
He said that his children-pastors alleged that he is evil and must abandon his herbal practice and join them to preach the gospel. The herbalist stressed that there is freedom of worship in Nigeria. “Let those of my children who preferred Pentecostal practice go on with that and allow me to  practics my own belief ”.
He said he had before now promised to sponsor their religious programme, including one week long crusade but they turned it down, only to point at him as a devil. According to him,  “If I am devil, all of them are children of devil.”
Odo pointed out that if his pastor sons’ repentance was to be making love to their father’s wife, then such repentance is evil before the creator of heaven and earth and man. He vowed to  take his children to court for threatening his life and beating him. The herbalist claimed  that his children are lazy, looking for his wives to sleep with.
“I have the wherewithal to care for the 200 children comfortably. Those who want to be useful can still make it with me. One of my daughters is a graduate and a two-term councillor at Igbo-Eze North Local Government Council and another one Amara, who is looking ahead of others, will be traveling to London to further her studies.
The so-called pastors are looking for a scapegoat.” However one of the seven pastors who preferred anonymity claimed that  their father does not want to take care of his children, saying that he only gave birth to them and abandoned them to their fate. He alleged that their father does not provide for them, but spends his money on frivolities, buying cars for others outside his immediate household.”

''The truth might be hard to say, painful to bear or even drastic for the truth sayer but still needed to be said''. ALISON.
Posted by The iPriest at 8:22:00 pm