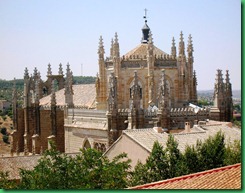 As one must have noticed, we are actually bringing to a general knowledge, certain aspects of life of the Missionary Oblates of Mary Immaculate, omi. We deem it necessary, however, to notify that the articles are not ours as we must have recognized it, but that of Fr. Frank Santucci, omi, specialist of the founder of the omis. We are just sharing these articles from his blog dedicated to the founder, Eugene de Mazenod speaks to us. Surely, one will need to visit his blog[1] to appreciate his work and effort.

This blog, we are convinced, though exposing the ideals of the Missionary Oblates of Mary Immaculate, is a must follow for not only every Christian, but also everyone who understands the importance of loving the most abandoned. Saint Eugene de Mazenod, from what one will understand by going through the posts, was and remains in his missionaries, one whose life was dedicated to fighting for the right and well being of the poor. I would not want to repeat here what Fr. Frank, has already done perfectly well in the blog. You are invited then to follow his blog as he makes it a point of duty making a daily update of it.

Around the year 415 AD John Cassian had established the first monastic complex in Western Europe in Marseille – a concept that was to inspire Benedict to do likewise in the following century. The Provençal Eugene would have been justly proud of this event and of the development and achievements of countless monasteries in France. Then the French Revolution destroyed all this.
It was in the context of this emptiness that Eugene wants his Missionaries to fill the vacuum, and so he stated as the second aim of the Society:


Article 1. The end of this association is also, as much as possible, to make up for the absence and loss of fine institutions which have disappeared since the Revolution and which have left a terrible gap of which religion is becoming daily more aware.

It was not a question of rebuilding monasteries, but of a group of active apostolic missionaries who would carry in the quality of their lives and service something of the spirit of these ancient monastic Orders. Certainly the presence of the Trappist Brother Maur in Eugene’s life from 1812 to 1815 would have had a part to play in sharpening Eugene’s awareness of monastic life.


Article 2. That is why they will strive to reproduce in their persons the piety and fervor of the Religious Orders destroyed in France by the Revolution. Let them strive to become their successors in virtue just as they succeed to their ministry and to the most holy practices of their regular life such as the living of the evangelical counsels, love of solitude, a disregard for the honors of the world, remaining aloof from dissipation, the abhorrence of riches, the practice of mortification, public recitation of the Divine Office in common, ministry to the sick and so on.

The monasteries had been pioneers of education in Europe, this it was this concern for the youth that also motivated Eugene in his youth ministry (which we have explored in detail in the entries of previous weeks)


Article 3. Once again, that is why the members of this Society engage as well in instructing youth about their religious duties in order to turn them away from vice and dissipation and to render them fit to fulfill fittingly the obligations that religion and society can legitimately expect of them in the various social positions they are destined to fill

1818 Rule, Part One, Chapter One. The ends of the Institute, §2. Missions, 78 (1951) p.13-14
With the fall of Napoleon, the monastic orders began to be restored, and the concern of Eugene was no longer necessary, except to learn from their example in their journey towards the ideal of the fullness of life in God.
Today we express it thus:


Our mission is to proclaim the Kingdom of God and to seek it before all else (cf. Mt 6: 33). We fulfil this mission in community; and our communities are a sign that, in Jesus, God is everything for us.