Pope: discourse to African and European Bishops gathered for Symposium 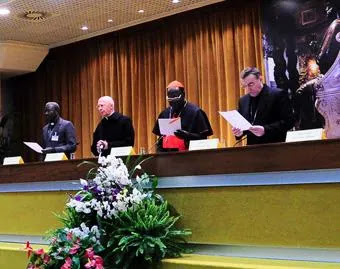 Pope Benedict XVI on Thursday addressed representatives of the episcopal conferences of Africa and Europe who have been meeting in Rome to participate in their Second Symposium on the theme “Evangelization today: communinon and pastoral collaboration between Africa and Europe”.
The Pope welcomed the bishops and addressed a special greeting to Cardinal Peter Erdo, President of the Council of European Bishops' Conferences, and Cardinal Polycarp Pengo, President of Symposium of Episcopal Conferences of Africa and Madagascar.
The Pope also expressed deep appreciation to those who promoted these study days, during which the focus was on evangelization today “in the light of mutual communion and pastoral collaboration that was established during the first symposium of 2004”.

Benedict expressed his appreciation for the spiritual fruits of the relationship made of friendship and cooperation born from the ecclesial communities of the two continents during these years. Notwithstanding cultural, social and economic differences, he pointed out, the bishops have emphasized a common apostolic goal and announced the good news of Jesus Christ and the Gospel in a spirit of brotherly exchange.
The Pope urged those present continue on this fruitful road to brotherhood and unity of purpose, increasingly broadening the horizons of evangelization.
He said that for the Church in Europe, the encounter with the Church in Africa is always a moment of grace thanks to the hope and joy with which the African church communities live and communicate the faith, something the Pope himself said he has witnessed during his Apostolic journeys.
On the other hand, Benedict pointed out, it's nice to see how the Church in Africa, although living in the midst of many difficulties and in need of peace and reconciliation, is willing to share its faith.
The Pope also reminded the bishops of Africa and Europe that it is their responsibility to keep in mind the essential link between faith and charity.
Quoting from the Gospel and from his Apostolic letter “Porta Fidei”, the Pope said it is the love of Christ that fills the hearts and spurs evangelization.
Then Pope Benedict spoke of current challenges faced by the bishops which he described as demanding. He mentioned religious indifference “which leads many people to live as if God does not exist, or to settle for a vague religiosity, unable to confront the question of truth and coherence”.
Today, the Pope said, “especially in Europe, but also in parts of Africa”, secularism is often hostile to the Christian faith.
“Another challenge for the proclamation of the Gospel”, the Pope continued, “is hedonism” which has affected the values in everyday life, the family, and the very meaning of existence.
He said that a “symptom of a serious social unrest is also the spread of such things as pornography and prostitution”.
And he encouraged the bishops to be aware of these issues which challenge their pastoral responsibility.
And he urged them to never be discouraged but to renew their commitment and hope because the risen Christ is always with us.
And Benedict highlighted the importance of the family which must be at the center of the bishops’ attention as Pastors.
In the family, he said, “which houses customs, traditions and rituals imbued in faith, is the most suitable soil for the flowering of vocations. Today's consumer mentality can have negative repercussions on the rise and on the care of vocations; hence the need to pay particular attention to the promotion of vocations to the priesthood and consecrated life”. The family, the Pope stressed, is where the core training of youth takes place. And, he said, “Europe and Africa are in need of generous young men, who can responsibly take charge of their future, and all institutions must have in mind that within these young people is contained the future, so “it is important to do everything possible to ensure that their path is not marked by uncertainty and darkness”.
And Pope Benedict stressed the importance of the cultural dimension He said the Church esteems and “promotes every form of authentic culture, which offers the richness of the Word of God and the grace that flows from the Paschal Mystery of Christ”.
Culture, he said, must be a constant concern that falls under the pastoral action of the bishops, always keeping in mind that the light of the Gospel is part of the cultural fabric.
Finally, the Pope referred to the Symposium saying it has given the bishops the opportunity to reflect on the problems of the Church in the two continents.
Problems, he says, that are not lacking, and are sometimes relevant, but on the other hand, are also proof that the Church is alive, growing, and is not afraid to carry out its mission of evangelization.
Source: http://www.news.va/en/news/pope-discourse-to-african-and-european-bishops-gat
''The truth might be hard to say, painful to bear or even drastic for the truth sayer but still needed to be said''. ALISON.
Posted by The iPriest at 8:12:00 pm