Hypocrites as Prayer Warriors: How Can God Heal Nigeria? by Obinna Akukwe

Just feel like sharing one of those articles that due to their relevancy withholds my attention. Despites all we might think of, Nigerians need to watch the situation and find out if really religion has its real meaning in our Country. If it real serves or divides us. I just wish people take this situation serious as it is a timed bomb that will surely explode. Whether we like it or not, Nigeria, from all indication will be a-religious if care is not taken. 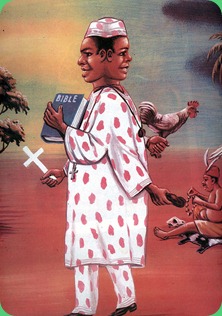 “In Nigeria it is prayer everywhere. The Churches, the Mosques, the Shrines, the forests, mountains, rivers, trees and every available space have been turned to prayer centers and yet the most insensitive governance is hoisted on the nation. Armed robbery, ritual killings, kidnappings, rape and injustice abounds everywhere. Poverty, sickness, despair, frustration and attendant mediocrity, loss of confidence and resort to negative tendencies are the results of all our prayers. Now we have the newest addition, suicide bombings and reckless waste of human lives. A lot of people of people have asked the question . Where is God when all these happens everyday?
Nigerians pray all manners of prayers- 70 day fasting, 70 day deliverance, 40 day sallat, sallah fast, pilgrimage to Jerusalem, pilgrimage to Mecca and other dedicated sites of worship and yet you cannot entrust an adherent with your spouse for 24 hours.
During General Sanni  Abacha military regime, prayer marabous were imported from Mali, Siera-leone and Senegal when their Nigerian counterpart failed to kill NADECO with prayer.    These professional prayer warriors couldn't tell Abacha that Nigerians were tired of his dictatorship. During Olusegun Obasanjo civilian Presidency a lot of prayer warriors in the villa were busy impregnating youth corpers serving in the villa in the guise of securing permanent employment for them while the tenure elongation wanted to tear the polity.  Obasanjo saw so much prayer hypocrisy that he had to resort to a combination of Africana and his faith to survive. Another group of prayer warriors have held President Goodluck hostage in the villa. They frighten him every time with gory prophecies while smiling to the banks.
Everywhere people are praying. All these prayers are hypocritical prayers. The Bible says in 2chronicles chapter 7 vs 14 thus “If my people, which are called by my name, shall humble themselves, and pray, and seek my face, and turn from their wicked ways; then will I hear from heaven, and will forgive their sin, and will heal their land.” The prerequisite for God to answer these prayers and heal Nigeria is repentance. David humbled himself when he was told by Prophet Nathan in the Bible that he had sinned. He tore his clothes and wept for many days until God had compassion. His Nigerian counterpart will do the opposite.
He will travel to Jerusalem and Mecca and in the midst of the solemn ceremonies will excuse himself to co-ordinate how the next looting of government treasury will be clinically executed, and then he will get back to finish the ceremonies. Once the pilgrimage is over the Nigerian prayer warrior comes back to his church or mosque with air of answered prayers, having met the Almighty in the mountain of transfiguration. Then the  poverty stricken congregation will hang around him to receive favors from  him( after nights of fasting and days of salat for God to touch his heart). God must be seriously solicited to touch the heart of the looter of public fund or else his church or mosque member will not receive any crumbs from the arrogantly distributed loot.
The impoverished parishioner or mosque member knows that his religious co-member was part of the people who directly or indirectly put him in a state of poverty, insecurity, hopelessness and helplessness and therefore he equally begs God to give him the opportunity to partake of the looting of the national wealth since the congregational leader have not cared to query his thieving but important member on the source of the loot.
The prayer warrior in Nigerian church or mosque is a hypocrite. Let his congregational priest or malam sermonize against sin, corruption, greed, inhumanity to man and disrespect for the feelings of others and he will get offended and leave the congregation while withdrawing his much needed funds. However, call for prayer that all his enemies will die including the members of Economic and Financial Crimes Commission, Independent Corrupt Practices Commission and Justices about to reverse stolen electoral mandates and you will see all sorts of acrobatics, gymnastics, incantations, invocations and madness all in the name of prayer.
There is no doubt that 'he that comes to equity must come with clean hands'. A thousand noise makers may be in a church but God hears only the ten who have decided in their heart not to follow the bandwagon if given the opportunity. If the combined prayer inertia of these ten men cannot move God or ward off the impending evil, then calamity is visited on everybody. That is the problem the nation is having with this Boko Haram and other problems plaguing the nation.
The dynamics of prayer is such that if your prayer is for personal or family matters, you could easily connect into the remote sites where the angels will attend to you on behalf of God. However, if your prayer were of general application, corporate in nature and of concern to the masses of people in your territory then another dynamics will apply. You must be sufficiently qualified before you can represent a state, region or nation in a prayer bouquet. A hypocrite could pray personal prayer and God will still answer because he is stirring personal spiritual space, however you must have enough locus standi before you stir a communal spiritual space in a prayer session. You must be potentially better than those you are praying against.
Let the Nigerian prayer warrior decide to live by the tenets of his faith which is “do unto others as you wish others do unto you” and before you raise your voice louder (even in a bush or batcher or atop mango tree) the Almighty God will answer and drive off those evil rulers who refuse to change for the better, out of our political space on their way to perdition”[1].
Obinna Akukwe