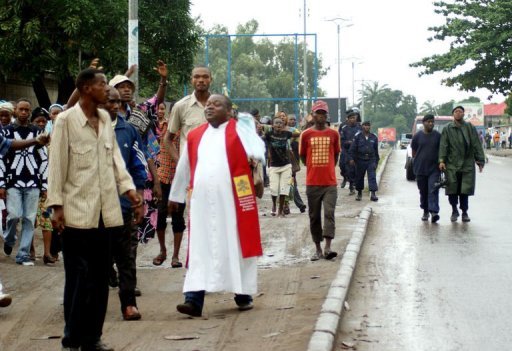 Police in Kinshasa on Thursday used tear gas to block a march by Christian groups protesting alleged fraud in the November polls that returned President Joseph Kabila and his party to power.
Groups of Christian faithful had been converging since dawn on the meeting point in front of Saint Joseph's church in the Democratic Republic of Congo's capital.
But riot police dispersed the growing crowd before the start of the march, which was also due to mark the 20th anniversary of the deadly suppression of a Christian pro-democracy protest but was banned by the government.

"Their repression was ferocious: they fired tear gas everywhere in the compound, right into the priests' quarters," Father Pierre Bonsangia, one of the march's organizers, told AFP by phone from inside the besieged church compound.
He said church workers had gathered information indicating that the security services had detained three priests and two protesters. Policemen were preventing people from reaching or leaving the compound, he said.
Kabila, in power since 2001, was declared the winner of a November 28 election which was condemned by the opposition and the international community as chaotic and marred by widespread irregularities.
Parliamentary polls held the same day gave the ruling party and its allies an absolute, albeit reduced, majority after a weeks-long tallying process that let resentment and distrust fester.
The Catholic Church is influential in DR Congo and one of the best organised forces in a country two-thirds the size of Western Europe but ranked the world's least developped state by the United Nations.
Catholic groups had the largest contingent of observers on voting day, with around 30,000 deployed across the country.
The Church issued a damning report in January that said the electoral process had brought shame on the country -- citing ballot-stuffing and a general climate of fear -- and urged the electoral panel to resign.
The organizers of Thursday's march had planned to condemn the manner in which the elections were conducted and the votes counted.
They also wanted to commemorate the February 16, 1992 march for democracy organized by Christian groups against the despotic rule of then president Mobutu Sese Seko.
The march was violently repressed and the bodies of several victims were brought to Saint Joseph's church.
Source: http://www.rnw.nl/africa/bulletin/dr-congo-police-teargas-christians-protesting-vote-fraud


''The truth might be hard to say, painful to bear or even drastic for the truth sayer but still needed to be said''. ALISON.
Posted by The iPriest at 12:52:00 pm