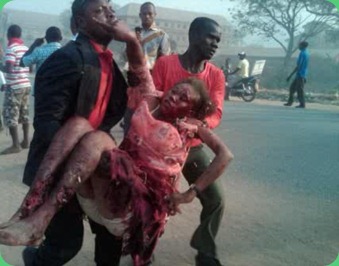 As I was preparing today for the festivity of the Christmas, my heart was torn by the news of Nigerians who were killed today as they were praying in the Church. I am sickened to the heart for my dear and lovely country. And I must confess that I have arrived to the stage of losing every hope on what people call Nigerian Government. Though many might deem it pessimism, I call it realism for our hope is always being shattered every day by the number of people dying in my dear country. What on earth can we call the series of attack perpetrated today in Nigeria? Even in Iraq and Bagdad we do not have that!
I, just like many other Nigerian patriots have called this government a dull and insensitive one and some think, it is out of hatred for the nation that we criticize the masquerade called politics in Nigeria. It is not true, for it is even the love of a nation, that we would have wanted to be better than it is now, that continue to force us into believing that the more we believe in Nigerian government the less we are been assured of her capacity of providing security for his citizens. I am even thinking that the nation is seriously moving to its doom and as early as we recognize it the better for us. It is no longer a question of prayers and hope but a moment of action; a time of determined and strategically well planned curbing of this ugly phenomenon called security crisis in Nigeria.
How can we explain a situation whereby every serious and necessary occasion in Nigeria is carried out in serious fear? Let’s not forget that the worst thing that can happen to a man is living under the pressure of fear. And that’s exactly the situation in Nigeria today for which Nigerian is not afraid? How many necessary events have been cancelled in the nation these last years? Something must be done or we will end up dividing Nigeria into different factions. Of course no one should tell me the JTF is doing something by carrying out a crackdown in some fiefs of the dangerous and devilish sect called Boko Haram. In fact, I was thinking that after the mistake of Obasanjo some years back, no one will carry out again this type of action.
Though it sounds good hearing the army is subduing their forces in their battle is doing well, but I am sure that’s the highest and one of the incessant mistakes that Nigeria has always repeated. The thing they do not think about is that these men are not dwelling in one city. They are not also as few as we think and most of them might not be Nigerians. For that reason, I am afraid Nigeria might need either a reformation or a revolution. It is either we reform the national situation, national socio-cultural policies, national security system and national culture of impunity or we will face an unpredictable revolution.
The nation needs a real reformation and we are only afraid of talking about. Permit me to evoke unwanted topics. Who denies that one Nigeria is still a desire and not a fact? How many Nigerians trust each other? What is the relationship between the North and the South? How many Igbo men really trust Hausas, and vice versa? We might say that it is not true but in our hearts it is as true as the fact that you are reading this article now, you cannot deny it. Even among those that call themselves believers or what. How many of us can fully trust one another independent of our origin? This needs to be reformed for we cannot build a nation on such foundations.
In many of my blog posts, I have always insisted that the problem of Nigeria as long as security is concerned, is logistics. No matter the number of security forces sent to the North, the bombing will continue. Call it pessimism or whatsoever, but the problem is somewhere else. Nigeria is not yet a nation and cannot control her territory. Though it might sound absurd but the truth is that any nation that does not know the number of her population cannot control her security. Who says Nigeria is a country when there is neither birth nor death registration, neither Identity card nor registered telephone numbers? Is that how we have a nation? Impossible!
As long as we do not have these, I will continue to say it, the nation will move to nowhere; and our country will continue to be a theatre of massacre and killings. And the outcome, of course, will be a popular vengeance. The citizens will retaliate by being hostile to each other and before you know it we will assist in another bloody civil war. So then, all those that know Goodluck Jonathan or whoever is responsible of this nation called Nigeria should let him know that the killings should stop. We the citizens are tired of hearing and assisting on regular bombing and mutilation of our brothers and sister.
Posted by The iPriest at 1:46:00 pm