It was a big feast last week when Dr. Augustine T. Ukwuoma, the Bishop of Orlu (Eastern Nigeria) visited the African Catholic Community in Verona, north of Italy. As the community members, predominately Nigerians and Ghanaians are still dwelling on the feast, lo

Tag di Technorati: Violence in Nigeria,Nigerian religious crisis,catholic Church.
ng gone, another phase is equally remarkable. The visiting Bishop was kind enough to talk about the repeated mutilations in Nigeria under the cover of Islam and Christianity. 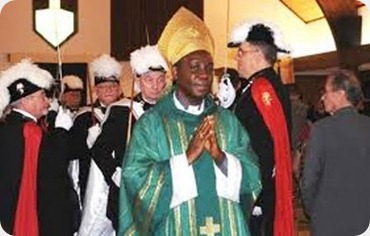 Looking at the wave of religious and ethnic violence in Nigeria, especially in the past few years, some people are fast to conclude that Nigerians are generally a violent people and unable to live together. What really is the situation?

The idea that Nigerians are unable to live together is incorrect. What Nigeria is currently going through is a social change; many countries including those in Europe have all gone through these changes.

Apart from the political game, like someone within the politics who might be orchestrating these hostilities for his ulterior motive, what is actually behind the religious tension in Nigeria?

In some places, especially in the north, there are violence which are based on different religious believes. However, many of the violence are motivated by cultural and tribal sentiments. Like for example, the issue of land ownership: who owns the land; who were the original owner of the land; can I bring in my cattle to graze on the land? These are some of the issues that quickly built up tensions among the local people and it’s often given a religious undertone, because religion is an easy means of igniting a tense situation.

To what extent are the Nigerian religious leaders truly concerned about the continue mutilation of the Nigerian people in the name of religion?

We are very concerned. We have devised a way to reduce the tension among the people. We are currently undergoing a process of interreligious dialogue among people of different believes. This process has been going on since the crises started… and to achieve the desired result, we need more sincerity and more honesty among the leaders. Sometime, there is the impression that the leaders are not in control of the people outside their immediate environment, like those far away in the rural areas. As religious leaders, I think we should have more influence over our people, no matter how far away they might appear. We need to be more open-minded and be ready to face the crises; we need to tolerate one another and be prepared to give and take.

How does an average Nigerian religious leader feel when he sees young Nigerians brutalising their fellow countrymen in the name of Islam and Christianity?

It is very bad; it is painful. Whether they are young Muslims or young Christians, it is very wrong; these are human beings. We don’t know what they will become tomorrow; so it’s very sad to see young people being slaughtered. In the post-election violence this year, many youth corpers were murdered in cold blood; this is wrong.

Since it is clear that sometimes few elements among the Nigerian religious leaders do manipulate their followers in an effort to create tension among the local people, what is the position of your lordship that these leaders should be held accountable for their actions?

As the hope of continues coexistence is concerned in Nigeria, what does the future holds?

Some people are thinking that Nigeria should split along religious line or into north and south. Well, I don’t think that is the solution to the Nigerian problems. I think the solution is more dialogue and understanding, especially at the grassroots level, because even if the country splits into north and south, there will still be Christians and Muslims in either side. So, it will always boil down to better understanding and tolerance among the people.

I am hopeful that regardless of all these years of crisis that Nigeria will eventually emerge a better society, with better understanding and peacefully coexistence.

Thank you very much, your lordship for your time.