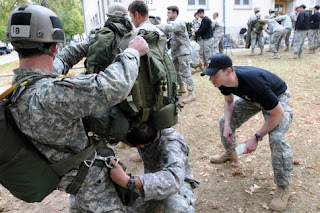 United States Marines have been deployed to Nigeria to help fight Islamic militants known as Boko Haram, sources have told SaharaReporters
The Special Forces, consisting of 10 units from Fort Carson in Colorado, will move into Nigeria through the borders of Chad and Niger Republic. Our sources said the US military gave the Special Forces only 48 hours notice to deploy. That narrow timeline suggests some urgency in the operation.
Two weeks ago, the United States warned of imminent Boko Haram attacks on some luxury hotels in the federal capital, Abuja. Nigerian security forces have largely been helpless in the onslaught of the militants especially in Borno and Yobe States, but their heads were given National Honours by President Goodluck Jonathan this week.
Intelligence sources in the US believe that Boko Haram is a group of about 10 smaller groups of militants mostly bolstered by Al Qaeeda connections
Source: http://saharareporters.com/news-page/us-special-forces-deploy-against-boko-haram
''The truth might be hard to say, painful to bear or even drastic for the truth sayer but still needed to be said''. ALISON.
Posted by The iPriest at 9:58:00 am