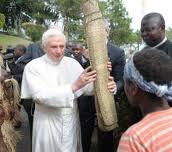 Pope Benedict XVI called for "true inter-religious dialogue" on the second day of his trip to West Africa's Benin.
The 84-year-old pope made his comments during a morning meeting with members of Benin's government, religious leaders and heads of diplomatic missions to the country.
He also spoke of the need to depict a fairer, more objective image of the African continent. "Too often, our mind is blocked by prejudices or by images which give a negative impression of the realities of Africa," he said.
"It is tempting to point to what does not work; it is easy to assume the judgemental tone of the moralizer or of the expert who imposes his conclusions and proposes, at the end of the day, few useful solutions."
The pontiff is halfway through his second trip to Africa since becoming leader of the Roman Catholic Church in 2005. His first trip to the continent was to Cameroon and Angola in 2009. That trip that was overshadowed by a comment suggesting that use of condoms worsens the spread of AIDS in Africa. 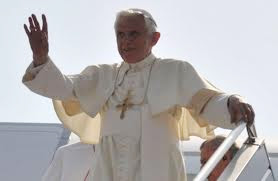 Among the highlights of this trip is the release of an 87-page papal document that outlines the role of the Church on the African continent. The pope will also visit the port of Ouidah Saturday, where voodoo temples stand near the port where Christian missionaries first arrived in Benin 150 years ago.
The pope will also pray privately at the tomb of Cardinal Bernardin Gantin Saturday. Gantin, a close friend of the pontiff, was the highest-ranking sub-Saharan African in the Roman Catholic Church at the time of his death in 2008. -Sapa-dpa
Source: http://www.thenewage.co.za/Detail.aspx?news_id=35557&cat_id=1019
''The truth might be hard to say, painful to bear or even drastic for the truth sayer but still needed to be said''. ALISON.
Posted by The iPriest at 9:46:00 am