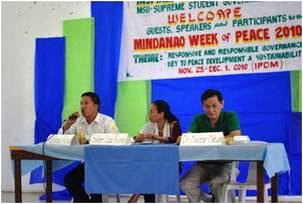 “Common word between you and us: Love of God and Love of Neighbor” – the theme of this year’s Mindanao Week of Peace originated from a famous letter written by 138 Muslim religious leaders and scholars from all over the world on October 13, 2007. They addressed the letter to Pope Benedict XVI and other leaders of the Christian faith. It was a call for peace and harmony through inter-religious dialogue. They quoted the Prophet Muhammad who had addressed the “people of the Scripture” concerning a “common word between us and you.” That common word consisted of faith in the One true God, Love of God and love of neighbor.
The reaction by Christians to the 2007 letter was unprecedented. “Common Word” discussions, conferences, dialogues sprouted in many parts of the world. Pope Benedict XVI invited Muslim leaders to a gathering at the Vatican. On November 4-6, 2008 the 1st Catholic-Muslim Forum was held in Rome on the “common word”: “Love of God and Love of Neighbor.” The forum is now held every two years and it involves inter-religious dialogue at the highest level between Catholic and Muslim leaders.
I was invited by the Pontifical Council for Justice and Peace to represent the Asian Bishops at the 25th anniversary of the World Day of Prayer for Peace in Assisi, Italy on 27 October 2011 For 25 years this gathering of Christian and Muslim Religious leaders from different parts of the world organized by the Pope has been a significant collaboration of different religions to contribute to world peace on the basis of their own religious traditions.
I believe that one can truly say that “Common Word” and the Assisi event express a common conviction that faith is at the service of peace and harmony.
Let me cite only a few examples of the declarations towards peace articulated by various representatives of different beliefs:
From the President of the Lutheran World Federation: “We commit ourselves to proclaiming our firm conviction that violence and terrorism are incompatible with the authentic spirit of religions.”
From the Metropolitan Patriarch of Moscow: “We commit ourselves to fostering the culture of dialogue.”
From the President of the Muslim Ulama and Mashaik Council of Pakistan: “We commit ourselves to frank and patient dialogue, refusing to consider our differences as an insurmountable barrier.”
From the Vice Supreme Patriarch of Teravada Buddhism in Thailand: “We commit ourselves to taking up the cry of those who refuse to be resigned to violence and evil.”
From an Atheist Representative: “We will make every effort to ensure that believers and non-believers in reciprocal trust can live out the shared quest for truth, justice and peace.”
Pope Benedict XVI summed up the many declarations by echoing the words of Pope John Paul II: “Violence never again! War never again! Terrorism never again! In the name of God, may every religion bring upon the earth Justice and Peace, Forgiveness and Life, Love!
A common quest, a common commitment, and a foundational common word for peace – that is the meaning of the Mindanao Week of Peace.
+Orlando B. Quevedo, O.M.I.
Archbishop of Cotabato
''The truth might be hard to say, painful to bear or even drastic for the truth sayer but still needed to be said''. ALISON.
Posted by The iPriest at 12:53:00 pm