Jos crisis: one of the questions that the nation has failed to answer by Alison 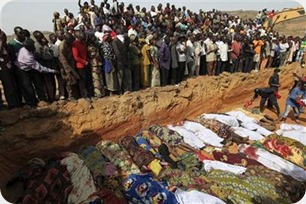 An Italian journal called ANSA.IT reports of a recent break out of violence in the central part of the nation. The journal talks of an impressive number of people killed yesterday, 24 November 2011, in a city, formerly known as a land of peace and tranquillity, Jos[1]. The journal continues by explaining the effort of the government in bringing to term this last violence between the two greatest religious confessions in the nation. The government, the journal explains, seeing the gravity of the situation declared a 24 hours of no movement in the area.
The question that continue to reoccur to many Nigerians, including my humble person, is whether the problem of Jos is beyond the government or the government takes joy in seeing her citizens destroy themselves by brutal and incessant killing of one another? Why has nothing been done to bring to an mayhem? If really the reason of their fighting is religious, as we are always made to believe, why have the religious leaders not been able to bring to order their followers? Have they really control of their followers or not?
But seeing the effort of most of the religious leaders, I start to think that Jos problem has to be revisited. It should be re-examined from another perspective. It should be giving, I think, first, sociological analysis to understand why life between people who ordinarily used to share the same land area, people who have practically grown together, just at a moment start to kill each other.
It should also be giving anthropological approach in other to understand why because of their relationship with God, if eventually the reason is religious, (though God will never want anyone to fight for him), the citizens find it difficult to relate peacefully. And if eventually the reason is religious, then the problem becomes more complex for how come that people worshiping the same God should kill each other if they believe in God at all?
In fact, something is wrong somewhere and those in charge of this people have a serious question to answer. They have to say why the situation continues worsening everyday and every moment? Who are responsible for this massacre? Who sponsors the crisis? Who have done what to redeem the situation and why has it not had a positive effect?
The problem of Jos crisis is not just the massacre but the inability to find out the reason behind the crisis; the inability to bring to table those sponsoring the crisis and why they do so.
Posted by The iPriest at 4:00:00 am