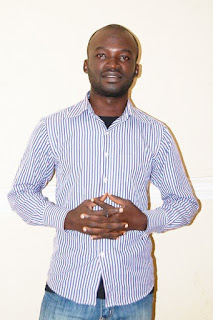 It is normal to swiftly call it a sketch of abnormality as the title captures your glance. It would only be a self-deception to assume that many minds are not casting doubt on rationality of this eccentric equation, perhaps out of expectation of a variable which needs to be joined (with the aid of a necessary arithmetic sign) to the preceding variable “COMMON NONSENSE” to necessitate the succeeding variable “COMMON SENSE” i.e. ‘A’ + COMMON NONSENSE = COMMON SENSE, as typical of mathematical equations. However, it would be interesting to see a critical mind embark on a voyage of curiosity in the bid to crack this startling equation. Making no slightest hesitation to agree with iconoclasts that “COMMON SENSE” is not an offshoot of “TRUTH” other than convention, tradition, hearsay or celebrated fallacy, and personally taking up the critical challenge to express the strange view that COMMON SENSE & COMMON NONSENSE are two sides of the same coin are reasons prompting me to be skeptical of reality of “COMMON SENSE”-an everyday concept naively used by many ones in our linguistic endeavour. My Scepticism is spurred by antagonistic discussions I recently held with some friends (Raymond Udofia and Carl Zeto) who scorned my views on certain issues just because they run contrary to what they called COMMON SENSE. Perhaps, you question this strange stance; you must also be prepared to clarify what “COMMON SENSE” really means. Hence, we ask …. What is COMMON SENSE? We would be far from objectivity if we address this question with recourse to Dictionary and Thesaurus. In as much as the lexicographer provides us with semantical and phonetic guides to the understanding of words and concepts, we must also agree that the semantical authority of the lexicographer is limited by infinitely dynamic experiences and cultural constraints, and as such, the Dictionary and Thesaurus are ill-equipped to give us an authoritative understanding of a controversial concept like “COMMON SENSE”. But let us attempt to define it in a sequential order by explanatorily separating the Adjective “COMMON” from the Noun “SENSE”. While it is grammatically indisputable that the adjective “COMMON” is synonymous with the bulk of all words qualifying and describing how “General” “Usual” “Prevalent” or “Ordinary” a particular Personal Noun, Collective Noun, Concrete Noun Or Abstract Noun is; conversely, the various attempts to define “SENSE” since antiquity till present age have engendered enigmatic and endless philosophical warfare in the circle of Big Minds. To now use the everyday adjective (Common) to describe or qualify this conceptually and practically stubborn noun (Sense) is tantamount to compounding the unsolved problem the definition of “Sense” created dating back to Antiquity. 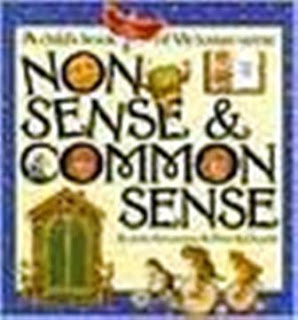 When we recall the way Geocentric COMMON SENSE made by Aristotle and Ptolemy (which idealistically put the Earth in the centre of the universe for over thousand years) met its waterloo in the wake of Heliocentric NONSENSE of Nicolaus Copernicus (1467 - 1543) and Galileo Galilee (1564 - 1642) which is presently the celebrated sense in the Astronomical circle, owing to realization of the scientific fact that it is the sun that occupied the centre of the universe, not the earth as wrongly held for many centuries, this should prompt an impetus to ask the question if it is rational for there to be a linguistic existence of a concept called “COMMON SENSE”. When an Observant Reader of the QURAN reflects on how the NONSENSE of “DIVISIBLE ATOM OR SUBATOMIC PARTICLES” in chapter 34 vs 3 of the Quran (revealed to mankind in the 6th Century via illiterate/unlettered prophet, named MOHAMMED S.A.W.) became a celebrated sense in the 20th Century in the circle of scientists just because it exposed the NONSENSE in the COMMON SENSE of “INDIVISIBLE ATOM” held by scientists for thousands of year dating back to Antiquity by Democritus, you must not but agree with me that the concept of “COMMON SENSE”  is nothing but a celebrated illusion, and if it is not an illusion, it is nothing other than “COMMON NONSENSE”. 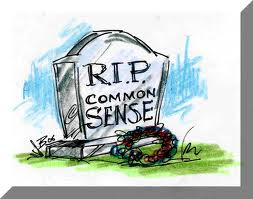 Having critically considered the complex concept “COMMON SENSE” as nothing other than illusion (which should rationally be stripped of linguistic existence), one might wonder why are we not considering the complex concept “COMMON NONSENSE” and the simple concept “NONSENSE” given the much enquiry about the concepts “COMMON SENSE” and “SENSE”. We must know that doing this would be a pointless philosophical exercise to venture into, because while the concept “NONSENSE” is a mere grammatical variation (opposite) of the concept “SENSE”, “COMMON NONSENSE” is just an insignificant equivalent of the celebrated illusion called “COMMON SENSE”. Hence, they are not real problems deserving much cognitive attention. Nevertheless, despite this dead-end, this should not make us view the concept “SENSE” as a “no go area” for the critically curious minds wishing to reach a destination in the voyage to conclusively crack the equation “COMMON NONSENSE = COMMON SENSE”. What we only need to do is to tread with caution the attempt to naively define “SENSE” in respect of the five (5) properties of a living body: namely “Sight, Hearing, Smell, Taste and Touch”. To exclusively define “Sense” like this is not only to cheapen the real/scientific problem of perceptual experiences’ fallibility, but it is also to assume that all living organism (Humans, Animals, Insects, Fish e.t.c) share uniform patterns of perception and cognition, since either of the powers of Sight, Smell, Touch, Taste and Hearing Constitutes an evidence of a Living Human, Animal, Insect, Fish and Other Organisms to many to be mentioned. Hence, let us move beyond this concrete definition to an abstract level of inquiry by being curious about Why “Sense” is a phenomenon that differentiates Humans from other organisms (animals, insects and others) and why sense is a phenomenon that differentiates Great Minds from small minds. In other words, in so far as I cannot boldly conclude that “Sense” is a sign of Rationality, Normality, Morality, Intelligence, Intellectualism e.t.c. nor as an incorporeal/corporeal stuff to decode the Dividing line between Rationality & irrationality, normality & abnormality, morality & immorality e.t.c but I would boldly admonish that Sense should not be crippled with worthless adjectives (i.e. COMMON SENSE, “GOOD” Sense, “BAD” Sense).

While appreciating your patience to read this piece to this level, I want to say that the deadlock reached on this note (especially on the clarification of the phenomenon called SENSE) should not be seen as a point of destination in our voyage or discouragement to completely solve the stubborn phenomenological problem of “SENSE”, because an African philosophy lover Alison once said “''The truth might be hard to say, painful to bear or even drastic for the truth sayer but still needed to be said''.
Posted by The iPriest at 6:52:00 am