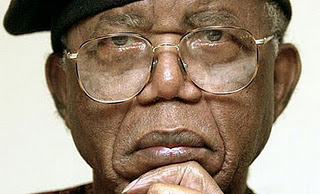 One of those Nigerians that make me feel happy whenever I present myself as a Nigerian in an international gathering or meeting is Prof. Chinua Achebe. I always think of him with much respect and pride. His measure as a national icon is undiscutably immense and that's why one will not be surprised hearing he is to be honnoured by the federal government. But the question has always been, honnoured by which government and in which moment of the national history? I think that's the bone of contention. No wonder why:
"Once again the very renowned Nigerian writer and author of "Things Fall Apart", Prof Chinua Achebe has rejected the offer from Mr President even as many prominent Nigerians file out tomorrow to receive this year's National Honour .
The author, who is among 364 nominees would have been honoured with the Commander of the Federal Republic - Nigeria's third highest honour.
Achebe said "the reasons for rejecting the offer when it was first made have not been addressed let alone solved. It is inappropriate to offer it again to me. I must therefore regretfully decline the offer again."
This latest nomination comes after Achebe in 2004 rejected the same honour by the then President Olusegun Obasanjo. He based his reason then on the dangerous state of affairs in Anambra, his home state and the country in general. In his two-page letter about rejecting the honour published in Nigerian newspapers in 2004, Achebe was most scathing about the situation in Anambra.
"A small clique of renegades, openly boasting its connections in high places, seems determined to turn my homeland into a bankrupt and lawless fiefdom. "Anambra state governor, Chris Ngige was last year kidnapped and forced to write a resignation letter at gun-point", he had said. He added: "Nigeria is a country that does not work-Schools, universities, roads, hospitals, water, the economy, security, life".
Achebe had told the media that he hoped that rejecting the Commander of the Federal Republic would serve as a "wake-up call". It will be recalled that the then Special adviser to President Obasanjo, Femi Fani-Kayode, told the BBC that Achebe had the right to reject the award, claiming that the author had lost touch with some of the events in Nigeria. Oops!".
Source: http://obehiokoawo.blogspot.com/2011/11/chinua-achebe-rejects-national-award.html
''The truth might be hard to say, painful to bear or even drastic for the truth sayer but still needed to be said''. ALISON.
Posted by The iPriest at 4:06:00 pm