Of her beginnings as a writer, Chimamanda Ngozi Adichie says:
I didn't ever consciously decide to pursue writing. I've been writing since I was old enough to spell, and just sitting down and writing made me feel incredibly fulfilled. (Anya 2003)
By the time she was 21, Adichie had already published a collection of poems, Decisions (1997), and a play, For Love of Biafra (1998). In the latter work, she recounts the painful experiences of a young Igbo woman, Adaobi, and her family, at the time of the Nigerian civil war of the late 1960s. The family's initial optimism about the creation of an independent and peaceful Biafran nation in Eastern Nigeria, after the region's secession from the rest of the country, ends in disillusionment. Daily massacres, hunger and disease claim several members of Adaobi's family and shatter the Biafran hopes.
Although Adichie was born seven years after the war ended, she states that she "ha[s] always felt a deep horror for all the bestialities that took place and great pity for the injustices that occurred" (Adichie 1998: viii). Her imaginative recreation of the events seems to suggest that the war has utterly, and perhaps permanently, affected the identity of generations of Igbo people. This indelible mark is strongly felt by the heroine Adaobi, even after the Biafran surrender. She rejects her Hausa boyfriend, who was away in England during the war:
Mohammed, I am a Biafran first, a Biafran last, a Biafran always, don't ever make the mistake of calling me a Nigerian again. (Adichie 1998: 106)
Adichie later called her play "awfully melodramatic" (2006b), but this early work testifies to her continuing preoccupation with the Nigerian civil war, a theme which she also explored in several short stories, including "That Harmattan Morning" (2002), "Half of a Yellow Sun" (2002) and "Ghosts" (2004), and which she was to tackle again in later years. 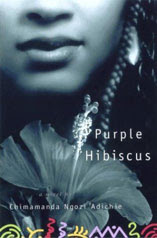 Since the early stages of her career, Adichie has displayed a keen awareness of the importance of ethnicity in Nigeria, but she has also paid much attention to the hardship often endured by Nigerian immigrants in the United States and England. In several of her short stories (e.g. "You in America" [2001, revised and published in 2004 as "The Thing around Your Neck"], "My Mother, the Crazy African" [n.d.], "New Husband" [2003], "The Grief of Strangers" [2004]), she has examined issues faced by first-generation immigrants in the West, ranging from abuse and financial difficulties to problems relating to language and identity.
Adichie's first novel, Purple Hibiscus (2003), received general acclaim. Set in Nigeria against the background of the late 1990s political turmoil, the story centres on Kambili Achike, a fifteen-year-old schoolgirl, and her family. Kambili's father, Eugene, is a complex character: a devout Catholic and a political rights activist, he also rules his household with a heavy hand. The narrative, told from the perspective of young Kambili, explores the adolescent's and her brother Jaja's responses to their father's authoritarian attitude, as alternative models are provided by their more liberal aunt Ifeoma and their Igbo traditionalist grandfather, whom Eugene dismisses as a "heathen". Family, religion, politics and tolerance thus appear to be the central themes of an outstanding novel which has already received considerable critical attention. 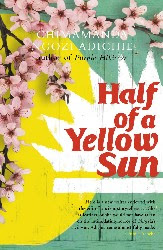 Adichie's second novel, entitled Half of a Yellow Sun like one of her short stories, was published in late 2006. Anticipated by both critics and avid readers of African literature at the time of its release, the book rapidly became one of the UK's best-selling works of fiction when it was featured on Richard and Judy's Bookclub on Channel 4. It subsequently earned several prestigious literary awards, among which the Orange Broadband Prize for Fiction (2007).
Half of a Yellow Sun, which is set before and during the Biafran war, is told from the perspectives of three different characters: first, Ugwu, a teenage boy who, at the beginning of the narrative, arrives in the university town of Nsukka, in south-eastern Nigeria, to work as a houseboy for Odenigbo, a mathematician who lectures at the local university; second, Olanna, a rich and educated young woman who becomes Odenigbo's wife; and third, Richard, a white Englishman who is obsessed with the roped pots of Igbo-Ukwu art and falls in love with Olanna's less attractive twin sister Kainene. The novel raises political questions as well as many challenging gender-, race- and class-related issues, but it also provides a sensitive portrayal of the characters and of their relationships with each other. While Adichie does not shy away from depicting the devastating effects of the Biafran conflict, she also shows her reader that people not only die, but also live, love and dream, in times of war.
Source: http://www.l3.ulg.ac.be/adichie/cnaintro.html
Listen to her story please.
''The truth might be hard to say, painful to bear or even drastic for the truth sayer but still needed to be said''. ALISON.
Posted by The iPriest at 5:14:00 pm