The Auxiliary Bishop of Abuja Archidiocese. 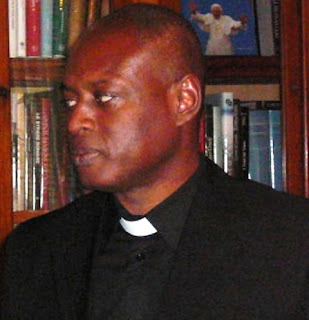 Vatican City (Agenzia Fides) - The Holy Father Benedict XVI on November 8, 2011 appointed Auxiliary of the Archdiocese of Abuja (Nigeria) Rev. Fr. Anselm Umoren, M.S.P, Superior General of the Society of Missionaries of St. Paul, assigning him the titular see of Scampa.
Rev. Fr. Anselm Umoren, M.S.P, was born on April 14, 1962 in Ukana Nto, Ikot Ekpene, Awka Ibom State, in the diocese of Ikot Ekpene. After primary school, he attended his secondary school at the Minor Seminary Queen of Apostles, in Afaha Obong, Abak. He became a member of the Apostolic Missionaries Society of St. Paul; he continued his studies in philosophy and theology at the National Missionary Seminary of St. Paul, Gwagwalada, Abuja. He was ordained a priest on June 18, 1988.
After ordination, he has held the following positions and carried out further studies: 1988-1992: Teacher at the Formation house of Iperu-Remo, Nigeria; 1992-1995: Missionary in the Diocese of Kenema, Sierra Leone; 1995-2001: Missionary in diocese of Buea, Cameroon; 1995-2003: General Counsellor; 2003-2005: Master in Development Studies at Kimmage Development Studies Centre and Master in International Peace Studies at the Irish School of Ecumenics in Dublin, Ireland; 2006-2008: Missionary in the Diocese of Torit, Sudan; 2003-2006: Project Manager. Since 2008, he has been Superior General of the Apostolic Missionaries Society of St. Paul's. (SL) (Agenzia Fides 08/11/2011)
Source: http://www.fides.org/aree/news/newsdet.php?idnews=30278&lan=eng
''The truth might be hard to say, painful to bear or even drastic for the truth sayer but still needed to be said''. ALISON.
Posted by The iPriest at 3:13:00 am