Africa should not be exploited for dubious ends, says Pope

Pope Benedict said on Saturday the developed world could not continue to look down on Africa “with the judgmental tone of a moralizer” and impose rules, but must come up with real partnership solutions to solve the continent’s many problems. 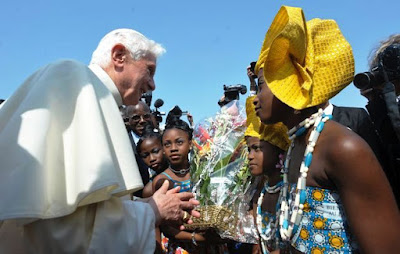 The 84-year-old pope made his appeal in an address to officials of Benin, including President Thomas Boni Yayi and the diplomatic corps, on the second day of his trip to the West African nation.
“Too often our mind is blocked by prejudices or by images which give a negative impression of the realities of Africa, the fruit of a bleak analysis,” he said.
“It is tempting to point to what does not work; it is easy to assume the judgmental tone of the moralizer or of the expert who imposes his conclusions and proposes, at the end of the day, few useful solutions.”
The main purpose of the pope’s three-day Benin trip is the publication later on Saturday of a papal document on Africa which he wrote after a synod of African bishops at the Vatican in 2009.
He said on Friday before he arrived that he chose Benin as the sole venue to deliver his document formerly known as an “apostolic exhortation,” because in some ways the country was exemplary.
Benin made one of Africa’s few peaceful transitions to democracy in 1990 after a period of Marxist-Leninist rule that had been supported by the former Soviet Union and Cuba. 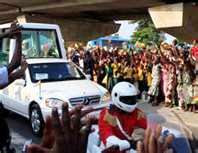 Unlike some of its neighbours where inter-religious strife is rife, particularly Nigeria, Benin also enjoys mostly peaceful coexistence among Christianity, Islam and traditional religions.
In his Saturday morning speech to diplomats at the presidential palace, the pope also repeated his condemnation of violence by anyone in God’s name.
“No religion and no culture may justify the appeal or recourse to intolerance and violence,” he said. “To use the revealed word, the sacred scriptures, or the name of God to justify our interests, our easy and convenient policies or our violence, is a very grave fault.” 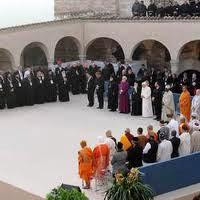 At an inter-religious meeting in the Italian city of Assisi last month, the pope said he felt “profound shame” for the use of violence by some in the Catholic Church over the course of the centuries, a reference to the crusades and the use of force by missionaries in the New World.
The pope said that the rest of the world should not see Africa merely as a place whose vast resources of energy, minerals, agriculture and people “are easily exploited often for dubious ends”.
This, he said, was “reductionist and disrespectful” and made objects out of Africa and her people. Benedict, however, also alluded to the problem of corruption and greed in Africa.
“Many conflicts have originated in man’s blindness, in his desire for power and for political and economic interest, to mock the dignity of people and of nature,” he said.
Later on Saturday, the pope was visiting Ouidah, a city west of Cotonou which is considered the capital of voodoo in West Africa.
He is visiting the city to pay tribute to the tomb of one of Benin’s most famous native son’s, Cardinal Bernardin Gantin, who worked in the Vatican for many years in a number of top church positions. He died in 2008.
AFP reported that the Pope signed the roadmap and labelled AIDS a mainly ethical problem.
The document says AIDS requires a medical response, but is mainly an ethical problem. Changes in behaviour are required to combat the disease, including sexual abstinence and rejection of promiscuity, it adds.
"The problem of AIDS in particular clearly calls for a medical and a pharmaceutical response," it says. "This is not enough however. The problem goes deeper. Above all, it is an ethical problem."
The Catholic Church's position on AIDS and the use of condoms has long been controversial and carefully scrutinised, particularly in sub-Saharan Africa, home to nearly 70 percent of the world's HIV cases.
The pope's comments on his first African trip to Cameroon and Angola in 2009 caused a global outcry when he suggested condom distribution aggravated the AIDS problem.
He has since seemed to ease that stance, saying in a book published last year that condom use is acceptable "in certain cases," notably to reduce the risk of HIV infection.
The 135-page document he signed Saturday was a summary of the conclusions of a 2009 synod of African bishops and includes peace, reconciliation and justice as its main message.
It condemns abuses against women and children, while issuing a call for good governance.
Speaking at the basilica in the city of Ouidah, where he signed the document, Benedict addressed those themes.
"These are important issues for the world in general, but they take on a particular urgency in Africa," he said.
"We need but recall the tensions, the acts of violence, the wars, the injustices and abuses of all sorts, new and old, which have marked this year."
Benedict had earlier on Saturday denounced corruption, warning it could lead to violent upheaval, and called on African leaders not to rob citizens of hope. 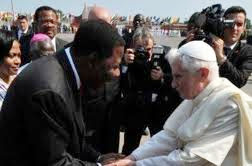 "At this time, there are too many scandals and injustices, too much corruption and greed, too many errors and lies, too much violence which leads to misery and to death," he said in a speech at Benin's presidential palace.
"These ills certainly afflict your continent, but they also afflict the rest of the world. Every people wishes to understand the political and economic choices which are made in its name. They perceive manipulation and their revenge is sometimes violent."
The pope is on a three-day visit to the west African nation, a voodoo heartland and Catholic bastion where thousands have greeted him joyously, particularly upon his arrival Friday.
Source: http://www.timeslive.co.za/africa/2011/11/19/africa-should-not-be-exploited-for-dubious-ends-says-pope


''The truth might be hard to say, painful to bear or even drastic for the truth sayer but still needed to be said''. ALISON.
Posted by The iPriest at 9:30:00 am