Cry My Beloved Country, Articles | THISDAY LIVE
Many have come to a conclusion according to which the nation instead of progressing is seriously moving to its damnation . Some false patriots call such men who refuse to bow down to unnecesary glorification of an unprogressing State non patriots. But I am thinking that there is a cause for a national reflection on which way forward. This is exactly what Dele Momodu is proposing in the this beautiful article that make a potrait of a decaying nation. 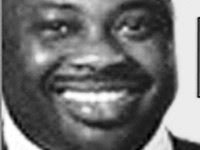 Dele.Momodu@thisdaylive.com
Fellow Nigerians, I’m in one of those foul moods and please don’t blame me if I choose to spoil your day a little. Recent events have made it impossible for me not to be angry. Some ardent readers of this column recently described my apparent frustration with the Nigerian state. They are right in their interpretation and assessment of my intermittent outbursts on this page. Every right-thinking, and truly patriotic, Nigerian should be worried about our state of anomy and abject backwardness and, as a matter of utmost urgency, join others in rescuing what God created to be one of the greatest nations on earth. I believe we were not created to be led by a set of ruthless, recklessly wasteful and incompetent leaders. But the way we have been conducting our affairs seems to suggest otherwise. The manner we allow government to trample on our fundamental human rights calls for general
Let me start with what should have been a simple and straight-forward matter, the arrest and detention of a popular Nigerian actor, Babatunde Omidina, alias Baba Suwe, 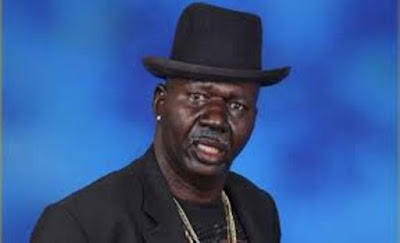 who was booked to fly to Paris, France, when he was stopped for a routine body scan by officers of the National Drug Law Enforcement Agency. According to reports, the result from the scanner showed very clearly that the talented comedian had buried within his belly many wraps of an illicit substance suspected to be cocaine. The news was as unexpected just as it was most shocking. Until that fateful night, Baba Suwe was a folk hero. He was a god of Yoruba drama who was worshipped at home and abroad. He was supposed to be on his way to Paris and was booked to be the compere at the naming ceremony of the child of an Air France staff in Paris when his ordeal started like a horror movie. That was the beginning of this incredible tragi-comedy.

All hell has broken loose since then. I didn’t know Nigerians were such great fiction writers. The superlative tales that poured out of the decadent Murtala Mohammed International Airport in Lagos made me wonder why we have not produced our own Sidney Sheldon or James Hardley Chase since all these years. I read some incredible pieces on the internet and on Blackberry in particular. A broadcast on Blackberry on October 14, reported: “Just confirmed from NDLEA that as at 3pm, Baba Suwe had excreted 16 wraps of Cocaine. Scanner machine confirms more drug substance in his stomach.” Even Alfred Hitchcock would have marvelled at the delivery of such suspense. There was also a comic side to this report: “Unconfirmed Report from NDLEA Maternity Ward! Cocaine! Celebrate with us Baba Suwe is reported to have excreted 16 pallets of cocaine”
Yet another one wrote: “…Baba Suwe 16 wraps ‘cocaine’ delivery, NDLEA insists cocaine examination results inconclusive. Baba Suwe formerly known as Adimeru would now wish to be addressed as Ajesara. All former documents remain valid.” The same reporter returned later to write that NDLEA said Baba Suwe had excreted only twice in six days and there was a minimum number of excretions a suspect must make to fulfil all righteousness, or fail so woefully, which was three times. After the man had excreted three times, a new theory emerged that he would have to do it six times as some of his predecessors started delivering their babies by the fourth push after falling into labour. It was not stated if they needed any epidural support. 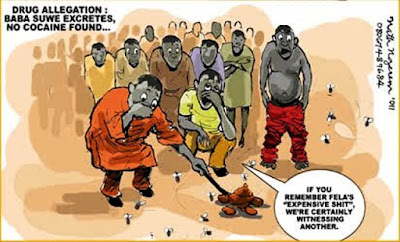 
''The truth might be hard to say, painful to bear or even drastic for the truth sayer but still needed to be said''. ALISON.
Posted by The iPriest at 12:45:00 pm