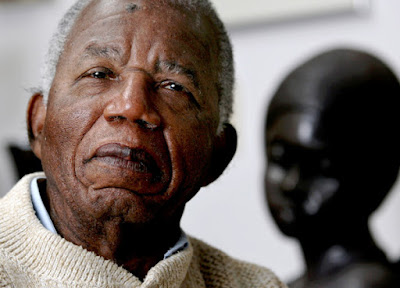 Author Chinua Achebe is Africa's most influential celebrity, according to Forbes magazine. The octogenarian author beat out dozens of musicians, soccer stars, two supermodels, a film director, a talk-show host and the world's top long-distance runner when he topped the 40-person list.
Achebe was born in Nigeria in 1930 and came of age when European colonies in Africa were making their way toward independence. His novel "Things Fall Apart," published in 1958, is said to be one of the most widely read works of African literature. His 1975 essay "An Image of Africa: Racism in Conrad's 'Heart of Darkness'," remains a significant work for its combination of literary criticism and politics. As Brown University, where he is now a professor, puts it: "This critique is recognized as one of the most generative interventions on Conrad; and one that opened the social study of literary texts, particularly the impact of power relations on 20th century literary imagination."
In the late '60s, Achebe was involved in politics, serving as an ambassador from Biafra. He has lived in both Africa and the U.S., where he spent 15 years at Bard College in Annandale-on-Hudson, N.Y., before taking his current position at Brown in Providence, R.I. In 2007, he was awarded the Man Booker International Prize for his lifetime body of work.
Three other authors also made Forbes' list. Two are from Kenya: 40-year old Binyavanga Wainaina, author of the widely read satirical essay "How to Write About Africa" and winner of the Caine Prize for African Writing in 2002, and Ngũgĩ wa Thiong'o, 73, author of "Wizard of the Crow," who is a professor at UC Irvine. The youngest is 34-year-old Nigerian-born Chimamanda Adichie, educated a Johns Hopkins and Yale; her novel "Half of a Yellow Sun" won the 2006 Orange Prize, and she was awarded a MacArthur "genius" Fellowship in 2008.
It's interesting to see so many authors among the ranks of African celebrities. In America, we often have celebrities first who only secondarily become authors -- like, for example, "Jersey Shore's" Nicole "Snooki" Polizzi, whose second book, "Confessions of a Guidette," comes out Tuesday.
Source: http://latimesblogs.latimes.com/jacketcopy/2011/10/africas-most-influential-celebrity-author-chinua-achebe.html

''The truth might be hard to say, painful to bear or even drastic for the truth sayer but still needed to be said''. ALISON.
Posted by The iPriest at 3:31:00 pm